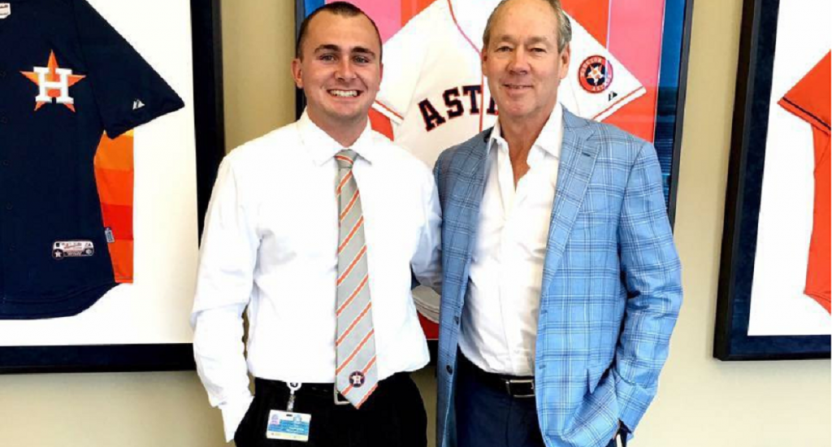 Yahoo Sports’ Jeff Passan reports that the Boston Red Sox were warned by the Cleveland Indians about “a man credentialed by the Houston Astros” potentially stealing signs or information during the ALCS.

The Indians reportedly caught the man, Kyle McLaughlin, using a cell phone to take photos in the direction of their dugout during Game 3 of the ALDS, and the Red Sox found him doing the same in Game 1 of the ALCS. McLaughlin was removed by stadium security by both the Indians and Red Sox.

The Boston Red Sox were warned that a man credentialed by the Houston Astros might try to steal signs or information from their dugout after the Cleveland Indians caught him taking pictures of their dugout with a cellphone camera during Game 3 of the American League Division Series, sources with knowledge of the situation told Yahoo Sports.

A photograph obtained by Yahoo Sports showed a man named Kyle McLaughlin aiming a cell phone into Cleveland’s dugout during the Indians’ 11-3 loss that ended their season. McLaughlin was the same man caught taking pictures near the Red Sox’s dugout during Game 1 of the AL Championship Series, which was first reported by the Metro Times. McLaughlin was removed by security in Cleveland and Boston, sources said.

Passan adds that McLaughlin isn’t listed as an Astros employee, but his Instagram account (which has been deleted… probably too late) includes a photo of him with Astros owner Jim Crane, as well as a photo of him next to what seems to be an Astros private plane.

Kyle McLaughlin was caught in Cleveland and Boston pointing a cell phone at the opposing dugout. He is not listed publicly as an Astros employee, but photos obtained by Yahoo Sports show him wearing an Astros ID badge and flying on a private plane with an Astros logo. pic.twitter.com/boa3jCFSJh

But these aren’t the only sign-stealing complaints from teams regarding the defending champion Astros in recent months. Passan reports that the Athletics called MLB reporting the Astros stealing signs in August, and the Los Angeles Dodgers had the same concerns during last year’s World Series.

This is not the first investigation into the Astros’ attempts to gain competitive advantages this season, three sources told Yahoo Sports. During a late-August game against Oakland, A’s players noticed Astros players clapping in the dugout before pitches and believed they were relaying stolen signs to pitchers in the batter’s box, sources said. The A’s called the league, which said it would investigate the matter. It’s unclear what the result of the investigation was or whether it remains ongoing.

Two major league players said they have witnessed the Astros hitting a trash can in the dugout in recent years and believe it is a way to relay signals to hitters. The Los Angeles Dodgers also believed the Astros were stealing signs during the World Series last season, according to two sources.

Now, stealing signs has been happening baseball since, well, probably since competitive games began. And they will continue to happen. But when they’re not something as simple as a runner on second base relaying a sign to the hitter, or the defense picking up a sign from the third base coach, it’s easy to see how this can be a really bad look that is frowned upon by opposing teams. And it could be a pretty big competitive advantage for the Astros if they have this dude focused on the opposing dugout all game to steal signs or whatever additional possible vital information.

There’s sure to be much more coming on this story, and it’s worth giving Passan’s full in-depth article a read.