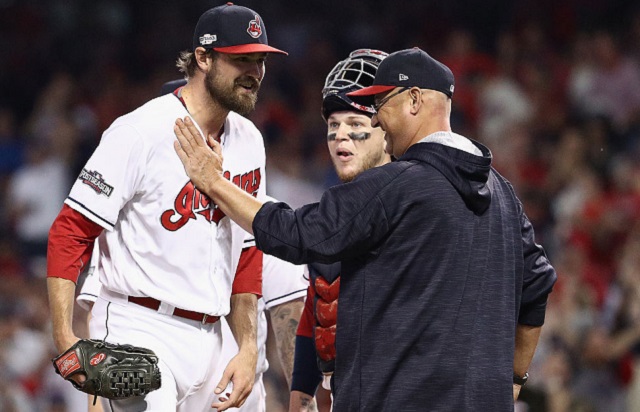 Baseball managers are, inherently, a timid and simple bunch. Okay, fine, there are some exceptions. And, yes, I know, we learn in nursery school to avoid painting with a broad brush and all that. And I’d like to, really.

Baseball may be the one sport where we, the fans and media, have close to as much information as those charged with making the on-field decisions. Perhaps there’s a specific scouting report we’re not aware of, or an off-field issue dragging a player down. But for the most part, we have the tools to evaluate all the managerial moves. We can look up hits allowed to left-handed batters and see what pitches batters hit well. Have you seen some of these advanced baseball stat sites? They look something out of a John Nash wet dream.

They also reveal just how backwards so many managerial decisions are.

How many times have we seen a manager seemingly ignore a basic lefty-righty split, or leave his top pitcher in the bullpen because he was waiting for a save opportunity? We’re all going to remember Buck Showalter leaving Cy Young Award candidate Zach Britton on the bench during a win-or-go-home AL Wild Card Game. But the more remarkable thing is that his decision to do so, while baffling, wasn’t that all surprising.

I’m honestly not sure why managers find it so hard to, well, manage a bullpen. Maybe it’s because so many of them are still classic jock-scratching, tobacco-spitting, old school baseball types who keep up on the league by watching Harold Reynolds on MLB Network. Maybe it’s because they just don’t get the concept of high-leverage situations, that some situations in a game (say two on in the eighth inning with two out in a two-run game) carry more weight than others (a three-run game with no runners on in the ninth), even though high-leverage is just another way of saying clutch and we know old school ballplayers LOVE the concept of clutch. But whatever, I have a different theory anyway.

So in political science, there’s a basic principle that politicians are primarily interested in keeping their jobs. This is the desire that governs the majority of their actions.

Baseball managers, I believe, are the same way. They want to keep their jobs. They’re terrified of being second-guessed. You say process over results? Please, they respond, try dealing with the back page of a tabloid.

All of which leads us to the Cleveland Indians and reliever Andrew Miller, and the way Terry Francona has unleashed him this postseason.

Over the past couple of weeks, Francona has transformed Miller into a new type of relief ace, something savvy baseball fans have been begging managers to do with their top bullpen arms for years.

This Andrew Miller Slider moved so much horizontally that the slow-motion camera couldn't keep up pic.twitter.com/FyItTH7Vyl

Miller, as you no doubt are familiar with by now, is in the midst of an all-time great postseason run. He’s thrown 20 innings and has yet to surrender a run. He’s used his Looney Tunes-like slider to strike out 31 batters while walking just three.

He’s also recorded at least four outs in each of his playoff appearances, and seemingly without breaking a sweat. Francona has deployed him in all sorts of situations, too. Two on in the fifth inning? Let’s get Miller. Meat of the order coming up in the sixth? Miller time! Runner in scoring position in a one-run game? Get me Miller.

He’s been dominant while on the mound and intimidating off of it. Thanks to Francona’s liberal trigger finger, Miller’s shadow has loomed over every late-inning rally mustered up by a Cleveland opponent. For years now, baseball teams have made it a goal to force an opponent to use its middle relief. Miller changes that, and you can be sure that the threat of his slider entering a game mid-rally has hitters feeling even tighter at the plate.

Francona has taken the shiny toy his team got him at the trade deadline and transformed him into the most valuable weapon in the playoffs. If the Indians win their first World Series since 1948, Miller — who was named ALCS MVP — will be the player who the team’s fans initially rush to thank, and everyone — managers, fans, media — following the 2016 postseason knows this.

Everyone has seen the way Miller, in this new role, has tilted the odds in Cleveland’s favor. Everyone’s seen how silly it is to save closers and how dangerous bullpens can be if used properly.

Many of us, of course, have understood this for years. But clearly math alone was not enough to get managers (or for that matter, stubborn “closers”) to budge on this line of thinking. Now, though, the whole baseball world knows better. Soon, not mimicking Francona’s Miller strategy could be the decision that leads to the sharp tabloid headlines and loss of public support.

Francona’s process has been right, but most managers don’t care about that. It’s the results they want to see and now that those have been there, too, look for the rest of baseball to follow suit.