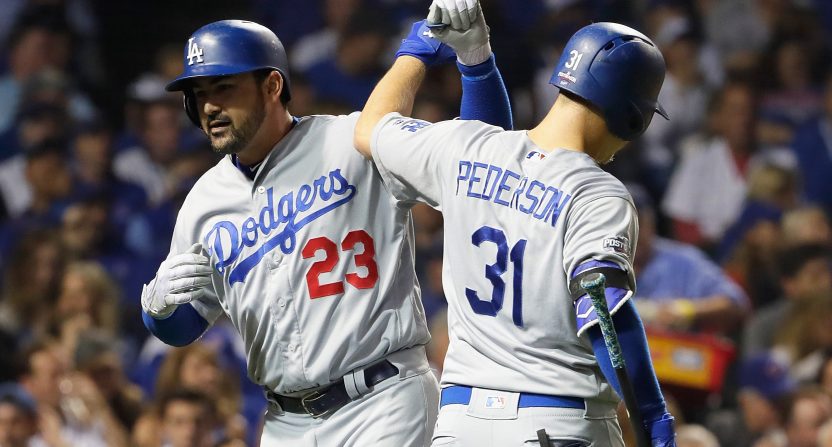 Those are the infamous words of the Oakland A’s Billy Beane from Moneyball, but they could very well be about the Los Angeles Dodgers. Yes, the big-money Dodgers have something in common with the penny-pinching A’s—a lack of postseason success.

Though the Dodgers have made the playoffs in each of the past four seasons, they have come up short of even an appearance in the World Series since winning it all in 1988. (Incidentally, that was against the Athletics. You may have seen some highlights.)

Los Angeles has made the playoffs ten times since then but has no pennants to show for it. They haven’t even gotten within reach of a spot in the Fall Classic in that span, having won only two NLCS games apiece in 2013 and 2016 before losing to the Cardinals and Cubs, respectively.

With the big payroll and regular-season success, the Dodgers don’t usually come to mind as a team down on its luck. Yet they’re one of just six Major League teams that has not appeared in a World Series over the past 28 seasons. The others—Baltimore, Milwaukee, Pittsburgh, Seattle and Washington—aren’t the teams you’d expect to see the Dodgers sharing space with.

That brings us to the pressing question: Is this the year?

There is good news and there is bad news for Dodger fans, and it’s the same thing: The 2017 team is largely similar to the 2016 squad. Last year, the team won 91 games and a fourth straight NL West crown. But they also squandered a 2-1 lead in the National League Championship Series to the Cubs, giving the team yet another playoff disappointment.

The hope in Hollywood is that this year’s team stays healthy. In 2016, the Dodgers set a Major League record by placing 28 players on the disabled list. That stat alone is largely why first-year skipper Dave Roberts was named National League Manager of the Year. The fact that Los Angeles made it as far as they did is impressive, but that is little solace to fans waiting for a World Series.

Andrew Freidman and Co. have amassed a ton of depth since taking the reins in L.A. That helps in the regular season, but winds up not being much of a factor in October. Take a look at that epic fifth game between the Dodgers and Nationals in last year’s NLDS. Closer Kenley Jansen went 2.1 innings, while Clayton Kershaw earned the save on just a day of rest.

More often than not, it seems as though the team with baseball’s biggest payroll is lacking in that depth that helps so much in the postseason. Last year, Jansen was the team’s only truly reliable reliever in the playoffs (A big reason why the Dodgers shelled out $80 million over five years to re-sign him this offseason). Prior to that, the team lacked quality starters behind Kershaw and Zack Greinke.

The offense was no match for Chicago last year, either. The Dodgers relied heavily on a 22-year-old Corey Seager and veteran Justin Turner to carry the load. While Seager will undoubtedly be one of the best players in baseball very soon, that’s a lot to ask of a rookie. Justin Turner has been spectacular in Dodger blue, but he hadn’t posted a bWAR above 0.8 before coming to L.A.

Though the team wasn’t all that active in the winter, it did shore up some major holes. Sergio Romo was pried away from the rival Giants to bolster the bullpen in front of Jansen. Logan Forsythe gives the team some much-needed right-handed pop in the lineup and fills a need at second base. Hyun-Jin Ryu finally appears to be healthy and at some point should be joined in the rotation by 20-year-old wunderkind Julio Urías. Prospect Cody Bellinger figures to be able to spell the aging Adrian Gonzalez some at first base.

That said, this team still has some serious question marks. Joc Pederson struck out 130 times last year, no one knows if Andrew Toles can repeat what he did over 48 games in 2017 and Yasiel Puig remains a wild card. All three are expected to start in the outfield.

The Dodgers will be good. That much is certain. PECOTA has them as baseball’s best team, winning 96 games this year (Though it should be noted that projections have consistently had the Dodgers winning more games than they actually do over the last few season).

So they should make the playoffs for a fifth-year in a row. But will the Dodgers finally win it all?

It’ll depend on whether their sh-t starts working in the postseason.