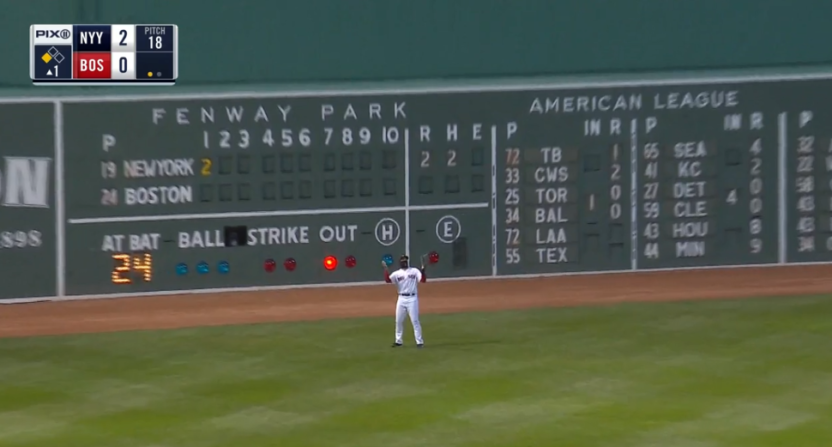 While New York Yankees’ catcher Gary Sanchez doesn’t receive as much home-run hype as the likes of teammates Aaron Judge and Giancarlo Stanton, he’s a power threat in his own right, hitting 20 dingers in 2016 and 33 last year. But you wouldn’t have known it from how Boston Red Sox left fielder J.D. Martinez and Yankees’ TV play-by-play announcer Michael Kay (likely spurred by Martinez’s own reaction) reacted to a Sanchez hit Wednesday.

Martinez seemed to settle under the ball and Kay called it like an easy out, only to then change his tune when the ball cleared the Green Monster for Sanchez’s second home run of the season. Here’s the clip of how this sounded on YES, via AA contributor Douglas Pucci on Clippit:

“High fly ball, left field. Martinez… and that ball is over the wall, a home run! A two-run shot for Sanchez, and it is 4-0 Yankees.”

It’s hard to be too tough on Kay for that one, as Martinez really did look like he had it, as color analyst Paul O’Neill noted afterwards.

“Michael, that might have been one of the hardest home run calls you’ve ever done! J.D. Martinez acting like he had it, Sanchez out of the box thought he got it. I didn’t know who to trust there!”

It’s also worth pointing out that Fenway Park’s 310 feet to left field is one of the shortest dimensions in the majors, so this would have been caught in a lot of other parks. And Martinez is still new to the Red Sox, so he’s probably still doing some adjusting to the ballpark and how things carry, and Sanchez certainly wasn’t having an impressive year to date (he was hitting .053 heading into this game). But even with all that context, this is still pretty hilarious. And it’s up there with Francisco Lindor’s steal for one of the funniest casual moments of the MLB season so far.