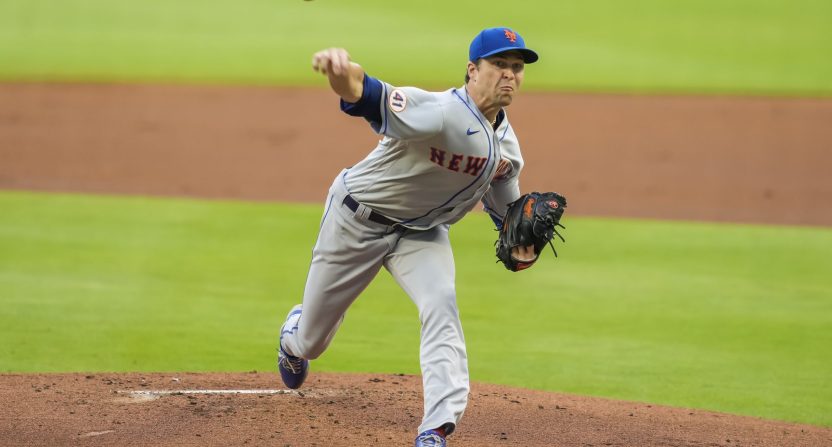 Might Jacob deGrom leave the New York Mets and head to a division rival at the end of the 2022 season? According to one report, that’s a strong possibility.

In April, Anthony DiComo of MLB.com reported that, despite his injury, deGrom was planning on declining his $30.5 million player option for the 2023 season and becoming a free agent. On Saturday, ESPN’s Buster Olney reported that if deGrom does opt-out, the Atlanta Braves will be favorites to sign the two-time Cy Young Award winner.

There is a perception in some corners of the industry that if Jacob deGrom follows through with what he said in the spring and opts out of his Mets' contract, the Braves will be the favorites to land him.

Buster isn’t wrong here. More than a few people in the industry believe this to be true as well. #Mets #Braves https://t.co/wryEH98skS

DeGrom is on record as wanting to be a career Met. And said when proclaiming his intention to opt out that he would do so with idea of hopefully returning to Mets

For him to go to Braves, above would have to be BS (possible) or Braves would have to outbid Mets & everyone else https://t.co/poZ6ksT5V7

There are multiple variables to think about here. The first question is, will deGrom opt-out? His comments in April would indicate that he will. Another sign pointing to an opt-out would be deGrom’s Mets teammate, Max Scherzer — who is four years older than deGrom — signing a contract worth $43.3 million per year last offseason.

The big difference between Scherzer and deGrom, though, is durability. While Scherzer is currently on the injured list, he made 30 or more starts in all but two seasons from 2010-2021. One of those was 2019, when he made 27 starts. The other was 2020, when he made 12 starts in a 60-game season.

deGrom is baseball’s best pitcher when healthy but unfortunately, that’s been a major issue over these last two seasons. He made only 15 starts in 2021 and July 7 will mark the one-year anniversary of his last Major League start. As great as deGrom is, paying more than $30.5 million annually to a pitcher that will turn 35 in June of 2023 is a big commitment. Naturally, a lot will depend on when deGrom returns and how well he pitches upon returning.

And if deGrom does pitch well upon his return, there’s something else to think about. He’s going to have plenty of interested suitors.

If deGrom becomes available, there will be a whole lot of teams going buck wild to try to get him. https://t.co/ORKmdB4Ggq

Furthermore, if there’s a genuine bidding war for deGrom’s services, everything about his run as Mets owner suggests that Steve Cohen is not likely to get outbid.

Atlanta is the reigning World Series champion and deGrom was a Braves fan growing up. So, it’s not crazy to think that Atlanta would have an inside track to signing him. But there are plenty of obstacles that would need to be worked through before that happened.