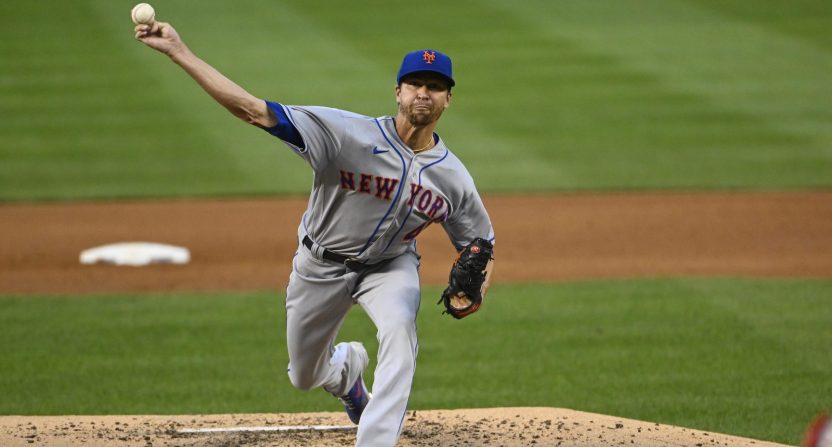 While teams around Major League Baseball welcomed their big trade deadline additions on Tuesday, the New York Mets welcomed a familiar face. Jacob deGrom had not thrown a pitch in a Major League game since July, 2021. But deGrom took the mound against the Washington Nationals on Tuesday

deGrom looked a lot like the guy who won the National League Cy Young Award in 2018 and 2019 and who was in the midst of one of the greatest seasons a pitcher has ever before his injury in 2021. He showed off both the velocity and break that he’d become so known for.

Jacob deGrom has hit 102 mph on the radar gun 🔥 pic.twitter.com/tfkXlOVMkW

His overall outing was outstanding. deGrom was limited to five innings (a total he never reached in his rehab assignments) but allowed only one run on three hits with no walks and six strikeouts. deGrom also consistently made opposing hitters miss the ball.

The MLB world reacted strongly to his return to a Major League mound.

deGrom day is not disappointing… 😤 https://t.co/II00tpEGMh

Jacob deGrom, who hadn’t pitched in over a year and hadn’t completed as many as 5 innings in any of his rehab starts, just looked like same guy he was last time he pitched in majors

Looked to tire a bit in 4th, but this was an amazing first start

His home debut could be Sunday

When deGrom is on, he’s baseball’s best pitcher. Two questions, though, lingered before Tuesday.

One was how long would it take him to return to top form. He still has to build up his endurance to go deeper into games. But as far as deGrom’s stuff goes, it’s back right now.

Question two is, can he stay healthy? That’s unfortunately a question that’s lingered with deGrom throughout much of his career and even more https://thecomeback.com/mlb/mets-jacob-degrom-sim-game-soreness.html. Time will ultimately answer that question, But one start in, things seem to be pointing in the right direction.