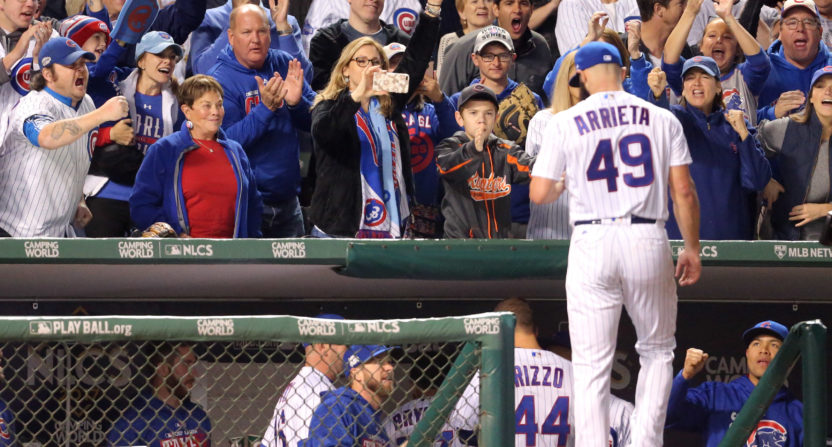 On July 2, 2013, the Cubs acquired pitchers Jake Arrieta and Pedro Strop from the Orioles in exchange for pitcher Scott Feldman and catcher Steve Clevenger. While the trade was a historically amazing win for the Cubs, they were actually the sellers in the deal.

At the time of the trade, Arrieta had a 7.23 ERA in five starts with the Orioles in 2013, and had a 5.46 ERA and 0.3 WAR with Baltimore in 358 innings pitched over four seasons. The former top prospect was always very talented with exceptional raw stuff, but he was just unable to put it together in Baltimore and it seemed likely that it would never happen with him no longer being a “young” player then at 27 years old.

Well, Arrieta went to Chicago, and the Cubs allowed him to be himself. Arrieta began throwing his cutter again, a (filthy) pitch the Orioles had him stop throwing. The Cubs had him go back to crossfire delivery after the Orioles had him cut it for a simple direct stride to home plate.

And Arrieta’s success in Chicago led him to the three-year, $75 million deal he just signed with the Phillies.

On Monday night, Arrieta tweeted a heartfelt thank-you letter he wrote to Chicago. Perhaps the most interesting part of the letter is Arrieta saying that things were so rough on him in Baltimore, that he was “on the verge of walking away from the game [he loves] dearly” in 2013 before Cubs president Theo Epstein called, “and the transformation began.”

In the midst of what felt like never ending adversity and failure, I was traded to the Chicago Cubs, on July 2nd, 2013. This day was the beginning of a four and a half year stretch that would forever change our lives. On the verge of walking away from the game I love dearly, Theo called, and the transformation began. I looked myself in the mirror, as well as my two year old son and pregnant wife knowing in my heart that everything was about to change.

Chicago was our home, and will forever be a special place for my entire family. We raised our children in Wrigleyville, one of the most iconic places in all of sports. Going to work everyday was an honor for many reasons from the storied history of the organization, to the high character individuals I was surrounded by year after year. Three consecutive NLCS appearances, two NL Central titles, and a World Series championship… the first in 108 years. Childhood dreams turned reality, thanks to so many amazing people, all holding one another to a very high standard.

I send gracious thanks to the Ricketts family and front office for their commitment to winning at any cost. Going the extra mile to take care of our families was never taken for granted. I was lucky to have dedicated teammates that willingly shed blood, sweat, and tears to achieve our goals. I will miss going to battle with all of you, but look forward to competing on opposite sides of moving forward. Lastly, thanks to all Cubs fans around the world for standing with us, and investing in us even when times were tough. You will all be missed dearly. Thanks for the memories.

Cubs fans, and now Phillies fans, are certainly glad Arrieta didn’t walk away from the game.

And you can be sure that the Cubs will honor Arrieta when the Phillies visit Wrigley Field June 5-7.