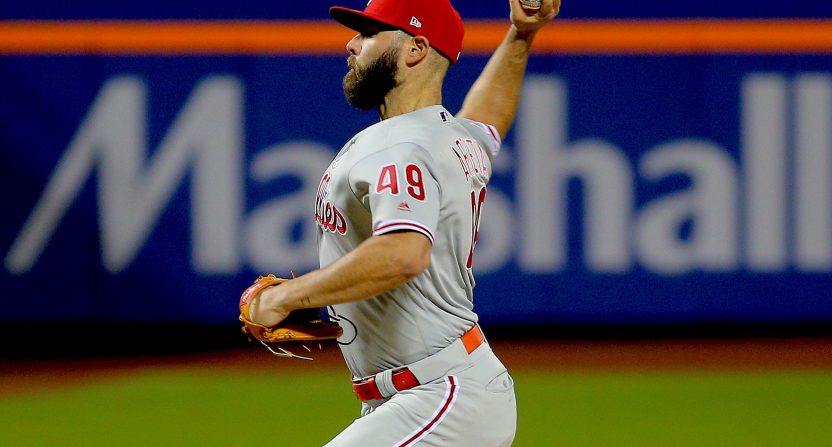 Jake Arrieta is known for being as straightforward as they come in MLB, and that was certainly the case on Monday night after the Philadelphia Phillies’ 5-1 loss to the New York Mets.

Arrieta was the starting pitcher for Philadelphia, and was quite unhappy with his teammates’ performance. The right-hander called out the Phillies’ preparation and effort, while adding that he was “out there doing everything [he] can to win a game.”

Jake Arrieta postgame: "I don't think our guys were ready to play. I'm out there doing everything I can to win a game. I need my guys behind me, and they weren't." Damn.

“I’m not happy with the way we showed up today,” said Jake Arrieta, who added that he didn’t believe #Phillies were ready to play after 95-minute rain delay at the start.

But the most eye-opening postgame comments from Arrieta were about teammate Bryce Harper.

Harper was ejected in the fourth inning by home plate Mark Carlson for questioning balls and strikes (after striking out earlier in the inning), and was quite angry about it.

Bryce Harper was just tossed from the game and was not at all happy with the umpiring crew pic.twitter.com/HDkoI36e5D

Jake Arrieta on Bryce Harper getting ejected from the dugout:

It’s rare that you hear a player calling out a teammate for getting ejected, and especially when it’s calling out a superstar player that just signed a massive ($330 million) contract. Just in case the Phillies needed any additional storylines this season!

Last June, Arrieta called out the Phillies’ defensive shifts in one of his starts to complete a “horsesh*t” series against the San Francisco Giants.

Arrieta allowed three earned runs over six innings on Monday night, and has a 2.65 ERA on the season in five starts. The loss drops the Phillies (12-10) to a first-place tie with the Mets in the NL East.