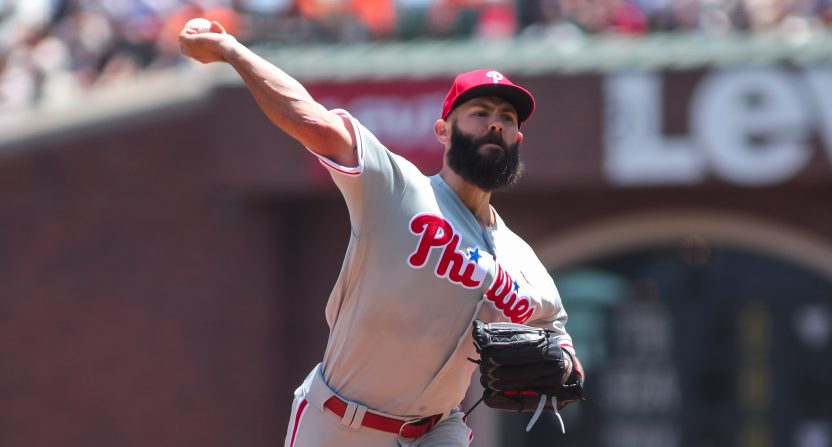 The San Francisco Giants completed a three-game sweep over the Philadelphia Phillies with a 6-1 victory on Sunday at AT&T Park. Jake Arrieta was on the mound for Philadelphia, and was cruising until the sixth inning, when he became the victim of some pretty rough luck. The Giants got four straight singles (three bloopers and a groundball), and Andrew McCutchen then hit a three-run, 336-foot homer down the right field line.

After the game, Arrieta was understandably frustrated, and was quite honest about things as he usually is. The 2015 NL Cy Young told the media that the Phillies played a “horseshit series,” and blasted the team’s defensive shifts.

Jake Arrieta described himself as furious, said Phillies defensive shifts are worst in the league. "We need to change that. Copy the best. That's not my job." Said needs to be accountability check "top to bottom," after "horse-bleep" series.

Even for Arrieta, that honesty is eye-opening, especially when you consider that he just joined the Phillies in March (on a three-year, $75 million deal), and the young team is exceeding expectations despite the “horseshit” series in San Francisco (Philadelphia is 31-26).

But Arrieta is coming off three straight NLCS appearances with the Chicago Cubs, and a World Series title in 2016. That 2016 Cubs team’s biggest strength was a defense that is considered one of the best in baseball history (and the stats and metrics back that up). So, he has very high expectations. And the data also backs up his criticism of the effectiveness of Philadelphia’s defensive shifts:

Jake Arrieta had harsh words about the Phillies performance in defensive shifts.

Only one other team rates negative- Dodgers are -1

Of course, when the team only scores ONE run in a three-game series, the defensive shifts probably aren’t the main thing to complain about. And the only run came on an Arrieta homer!

The Phillies will look to get things back on track — and perhaps make some shift adjustments — on Tuesday when they head to Arrieta’s former home, Wrigley Field, for a three-game set against the Cubs.