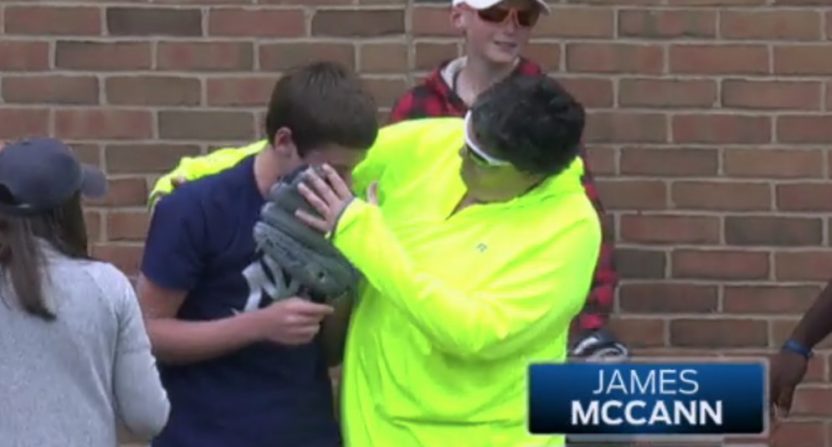 Thursday’s Yankees-Tigers game is out of control.

We thought maybe the teams had gotten all their anger out after a massive sixth-inning brawl, in which Miguel Cabrera and Austin Romine tackled each other to the ground and exchanged punches, but it appears not.

Since that dust-up, we’ve seen a fastball to the head, two more benches-clearing incidents, a bunch more ejections, a fight among Tigers players and, somehow, a home run to the face of a Yankee fan.

Detroit catcher James McCann has been at the center of much of that action. First, McCann was the victim of a Dellin Betances fastball to the head that may or may not have been (but probably wasn’t) intentional.

The following inning, he came to the plate and got some measure of revenge with a home run off reliever Caleb Smith. Somehow, the ball seemed to strike a Yankee fan in the face. Considering the game was being played in Detroit, that was a pretty wild coincidence. It’s as if McCann had taken vengeance on an innocent Yankee fan.

McCann beaning a Yankee fan in the outfield is creative but way over the line pic.twitter.com/d3E2mNCwrB

At some point amid this craziness (we didn’t even mention Alex Wilson beaning Todd Frazier), the Tigers got into some intrasquad bickering. Based on footage for YES Network, it looked as if Justin Verlander grew upset with Victor Martinez because Martinez had made nice with opponent Gary Sanchez after Sanchez threw a cheap shot at Cabrera. Verlander flipped off Martinez, and the two almost came to blows.

Verlander flipped off Victor Martinez in dugout for standing with Sanchez as Castellanos told of cheap shot. V-Mart then had to be held back

If you need a sense of how absurd this game has been, here’s a list of people who have been ejected from the game, at last check:

This whole thing is just a massive mess. But hey James McCann, maybe we can leave the fans out of it?