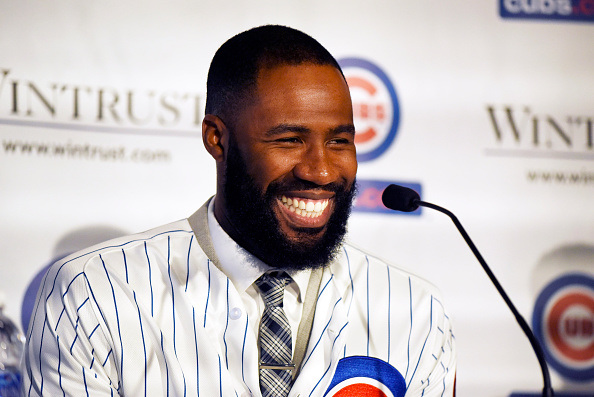 Jason Heyward spurned the St. Louis Cardinals for the Chicago Cubs, and naturally, Mike Matheny is not thrilled about it.

The St. Louis manager took particular issue with Heyward’s reasons for leaving, according to the St. Louis Post-Dispatch. The outfielder, who signed an eight-year $184 million deal with Chicago, said last week he preferred the Cubs’ young core to the Cardinals’ older one.

Here was Matheny’s (verbose) response, per the Post-Dispatch:

“I told Jason this before. I’ve got a lot of respect for Jason as a person. He’s got to go make the decisions he’s going to have to live with. If that (core group comparison) is a big deal to him, he’s just being honest with people.

“But I don’t think we have anything to apologize for in having a group like a Holliday, a Molina, a Wainwright. Those are the kinds of guys everybody wants on a club.

“I see where he’s coming from. I mean, look at what Chicago’s done. It’s very unique in this game — to have that many impact players at that young age. And he’s a young player. But I can’t say I’m in any kind of agreement with that (Chicago) core being better than any kind of core that we have.

“That veteran group (that the Cardinals have) also helps drive what the younger group turns into.”

“I don’t blame him. But I don’t like it. I thought we created a really good atmosphere and he had to weigh what was most important to him.”

Continuing, Matheny offered, “Say if we hadn’t won. … That would have made a difference. Say if we hadn’t created an atmosphere where he was a major part of what we’re doing. … Neither of those is true.

“Say we hadn’t made an offer. We made a terrific offer. With all that being said, it comes down to what does a guy want? (Staying in St. Louis) just wasn’t what he was looking for.”

Matheny was probably specifically upset by the 26-year-old Heyward specifically mentioning players Holliday, Molina, Wainwright, who are close to the end of their careers.

“There were already moves made with Jon Jay gone and then Tony Cruz and Wainwright is probably going to be done in three or four years. … Guys like that are what really introduced me to the St. Louis Cardinals’ organization. I felt like if I was to look up and in three years see a completely different team, that would be difficult.”

Here’s more from Heyward, also via the Post-Dispatch.

Rizzo, Bryant and Arrieta combined for 20.8 wins above replacement in 2015, according to Baseball-Reference. The three Cardinals player Heyward mentioned, meanwhile, totalled 2.0 WAR, with Wainwright missing almost the whole season because of an Achilles injury and Molina and Holliday submitting dramatically sub-standard seasons while also missing time with injury.

The Cardinals won an MLB-high 100 games in 2015 thanks to impressive roster depth, but were bounced by the 97-win Cubs in the NL Division Series. This offseason, Chicago stole Heyward and pitcher John Lackey from St. Louis, leaving the Cubs as the overwhelming favorite in the NL Central entering 2016.

So although Matheny is justified in his frustration that Heyward called out the Cardinals specifically (in the midst of saying he loved the St. Louis organization, for the record) it’s hard to dispute that the Cubs’ future is looking brighter the Cardinals’.

The smart money says Heyward made the right choice – but if the Cardinals once again reign supreme in the NL Central and the Cubs fail to end their historical run of futility, Heyward could end up on the wrong side of this decision.