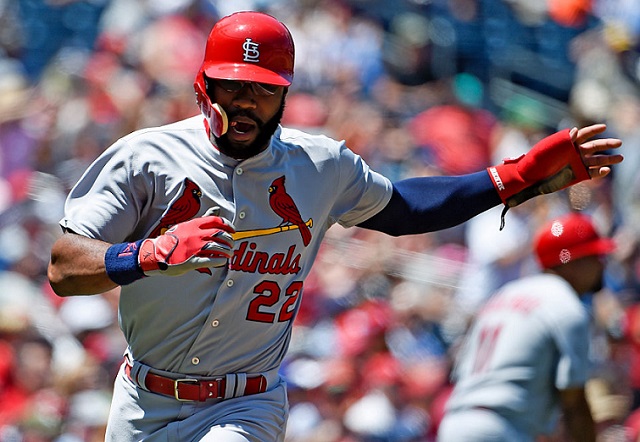 One day after MLB’s winter meetings ended, arguably the top position player on the free agent market has finally chosen a team. And if possible, the rivalry between the Chicago Cubs and St. Louis Cardinals just became even more interesting.

Outfielder Jason Heyward is signing with the Cubs, as first reported by the Chicago Tribune‘s Gordon Wittenmyer and then confirmed by multiple national sources.

Before and during the winter meetings, it was rumored that the 26-year-old was seeking a deal in the range of 10 years, $200 million. The Cardinals, Cubs, Angels and Nationals were all reportedly in pursuit. However, ESPN’s Jayson Stark tweeted that Heyward was actually seeking a slightly shorter contract with a higher average annual value. Wittenmyer is reporting that the contract is an eight-year agreement believed to be worth $185 million.

This past season — his only one in St. Louis, as it turns out — Heyward compiled a .293/.359/.439 triple-slash average with 33 doubles, 13 home runs, 60 RBI and 23 stolen bases. He also played his usually excellent defense in the outfield, playing mostly right field. According to advanced metrics, Heyward was credited with +22 Defensive Runs Saved in right field and saved the Cardinals nearly 23 more runs than an average player would have at that position.

It’s that defense, along with being a free agent at a surprisingly young age, that made Heyward one of the top targets on the open market despite relatively disappointing offensive numbers for a player of his build (6-foot-5, 245 pounds) who plays a corner outfield spot. Heyward has hit fewer than 20 home runs in each of his past three seasons, and that lack of power had several MLB executives and talent evaluators skeptical that such a player deserved an elite contract. (Tom Verducci outlined the dilemma with Heyward in an excellent article for Sports Illustrated this week.)

But a contract reportedly paying more than $23 million per season appears to be an endorsement of the value of defense, on-base percentage (Heyward’s career mark is .359) and advanced metrics increasing the total view of a player’s skills. And thanks to the Atlanta Braves putting Heyward in their 2010 opening day lineup, without giving any consideration to service time and getting an extra year of club control, he hit free agency at a far younger age — and with possible upside still to reach — than most top hitters when they typically become available.

Adding Heyward to their roster gives Cubs team president Theo Epstein and general manager Jed Hoyer a variety of options now. Will Heyward play center field, where his bat is probably a better fit, or keep him in right field where he’s an elite defender? If so, that makes Jorge Soler a strong trade chip for the Cubs to shop around this winter. That could yield another starting pitcher or top-tier reliever. The front office might then pursue a less expensive free agent option in center field, such as Denard Span or re-signing Dexter Fowler.

For the Cardinals, this is obviously a huge blow. (It’s surely just a bit more painful to see Heyward go to a fierce division rival.) Though the team has players that can replace Heyward in right field, a proven veteran who provided excellent defense was a preferred option. Speculation is that St. Louis will now focus its efforts on free agent outfielder Alex Gordon to fill that hole on the roster. Though Gordon is older, turning 32 in February, he profiles as a similar player who plays great defense and might even hit for more power. He’ll certainly be less expensive and sign a shorter-term deal.

UPDATE #1: Heyward’s contract is an eight-year, $184 million agreement, according to Fox Sports’ Jon Paul Morosi. He can opt out of the deal after three years.

UPDATE #2: It appears Heyward took less money (and perhaps fewer years?) to sign with the Cubs.

Source: Jason Heyward turned down three offers higher than the $184M he took from the Cubs, including two of $200M+.