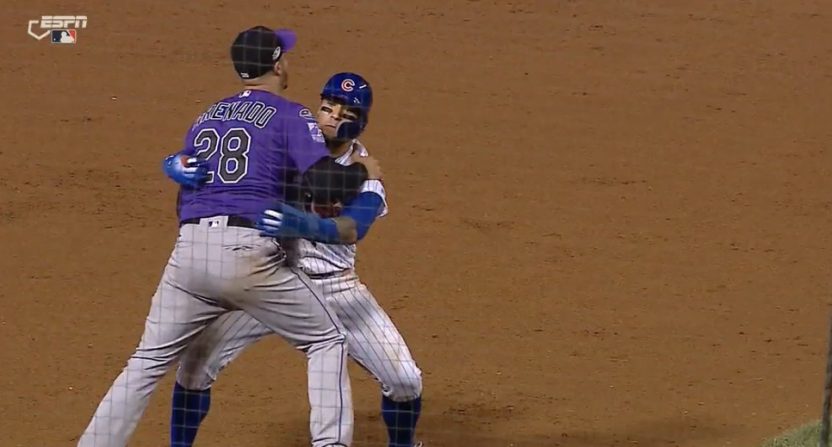 The Colorado Rockies-Chicago Cubs NL wild-card game Tuesday gave us plenty of strange moments, including a catcher’s interference call in the bottom of the seventh and a pinch runner (for Anthony Rizzo, no less) stealing a base to set up the tying run in the bottom of the eighth. But a play on the basepaths in the bottom of the 11th inning may have been the strangest yet. With runners on first and second and one out, after a long delay to determine if batter Willson Contreras could continue after an injury, Contreras hit a ground ball to Rockies’ third baseman Nolan Arenado. Javier Baez was running to third, and Arenado went and tagged him, and the two wound up in a hug:

You gonna tell me this country can't come together? pic.twitter.com/pe57vEkRvO

And that proved quite controversial, with Rockies’ manager Bud Black in particular arguing that Baez should have been called for interference with a potential double play. And he got some support from ESPN analyst Alex Rodriguez.

Many found that pretty funny coming from Rodriguez:

"Strangest thing I've ever seen on a baseball field" – Alex Rodriguez, who once intentionally slapped the ball out of a defenders glove, then tried to play innocent.

Alex Rodriguez, that is not “the craziest thing you’ve seen on a baseball field” You yelled at guy to get him to drop a pop fly. You swatted a tag away. Tell those stories when that happens.

“The rules are the rules”

On the ESPN2 Statcast, cooler heads prevailed, with Jason Benetti, Mike Petriello, and Eduardo Perez pointing out that Arenado didn’t make an effort to make a throw, and that he actually grabbed Baez as well instead:

And this led to some other funny jokes:

When the runner hugs you while the play is still live pic.twitter.com/ydaBLyVTF4

At any rate, this was certainly unusual. And it provided even more ammunition for many to complain about A-Rod.