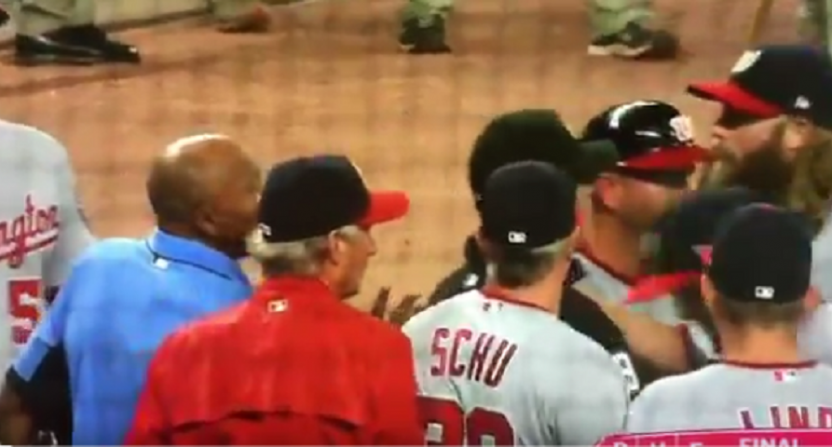 There are a few umpires around Major League Baseball who always have a way of getting involved in the game in a way nobody wants to see. On Tuesday night in Atlanta, CB Bucknor was at it once again with his signature lack of consistency behind the plate calling balls and strikes. After picking up a 3-1 lead, Jayson Werth of the Washington Nationals had to be held back while giving Bucknor a piece of his mind.

Jayson Werth letting CB Bucknor have it after the game pic.twitter.com/sELuQix4sB

That is because the Nationals appeared to have won the ballgame, only to be called back to the dugout and to the field to continue playing by Bucknor. Bucknor kept an at-bat by Chase d’arnaud alive after calling this a foul ball.

This was ruled a "foul ball." I s–t you not. He missed it by several inches. #umpshow pic.twitter.com/TSDGoLaPgz

Werth later sounded off in the clubhouse with reporters.

Jayson Werth on C.B. Bucknor: "When it's consistently not with the standards of the league, something needs to be done."

Werth: "Every time, its bottom of the barrel. Every time."

Werth wasn’t the only one looking to sound off about Bucknor. Ray Knight went to town in the Nationals postgame studio show too.

Ray Knight had some thoughts about CB Bucknor after the game pic.twitter.com/KFYz2ZcDjb

What exactly seemed to be the problem on Tuesday night? Aside from the bizarre ending to the game, it was an inability to maintain a consistent strike zone, thus causing a rash of confusion between pitchers, catchers and batters all night…

Beyond the end-of-game fiasco, here was the strike zone as called tonight … pic.twitter.com/BbOwHPSjWs

When umpires complain about robots taking their jobs in a few years, show them this strikeout. pic.twitter.com/AZj1HTSEYM

This is CB Bucknor's strike zone, and how Jayson feels about it. pic.twitter.com/fCXJCxu06l

What the strike zone should be vs what CB Bucknor's strike zone is right now and always pic.twitter.com/6BsfBj8JIz

The reactions from Werth and Knight are heard on a regular basis around the majors, from city to city. How Bucknor remains employed is a testament to either how bad the umpiring depth is in this country or just how good the umpire union is at protecting their own from losing a job.

Every sport has bad officials we expect to uphold order within the game, but every sport also has guys like CB Bucknor who continue to be known for all the wrong reasons. If there is any good to come from CB Bucknor, it may be his ability to brings fans of all teams together.

Dear @Nationals, as a @Braves fan, we can't agree on much, but we can all agree on one thing: CB Bucknor is a terrible umpire.

I don't even care that we lost tbh. All 9 innings of baseball were 100% worth seeing Ron Washington pull a Jedi mind trick on CB Bucknor.

Maybe MLB can stop worrying about pace of play for a few minutes and do something about CB Bucknor. My goodness.