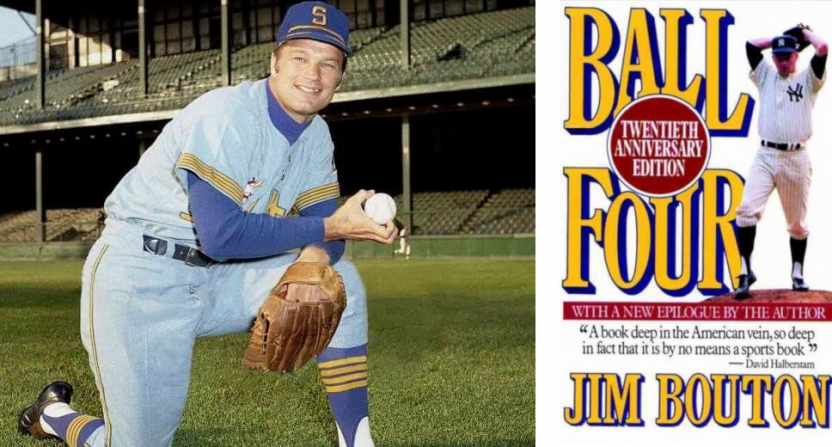 Famed author, pitcher and sportscaster Jim Bouton has passed away. Bouton made a huge impact on the sports world for decades, first as a MLB pitcher, then as an author of the tell-all book Ball Four, then in further stints as a TV sportscaster in New York, and then with a short MLB comeback. As per Brian Niemietz and Larry McShane of The New York Daily News, the 80-year-old Bouton passed away Wednesday:

The author of the groundbreaking hardball tell-all “Ball Four” died Wednesday following a battle with a brain disease linked to dementia, according to friends of the family. The Newark, N.J., native was in the Massachusetts home he shared with his wife Paula Kurman after weeks of hospice care. He was 80.

Bouton first signed with the New York Yankees as an amateur free agent in 1959 after pitching at Western Michigan University, and he went on to play for them in the majors from 1962-1968. He found great success early on, including seasons with 4.8 and 4.1 wins above replacement by Baseball Reference in 1963 (where he went 21-7 and was named an all-star) and 1964. But an arm injury in 1965 hurt his fastball velocity, and he wound up reinventing himself as a knuckleballer and pitching in the minors for the Seattle Angels in 1968. The MLB expansion Seattle Pilots signed him in 1969, and while that season wasn’t his best on the field (he produced 0.5 WAR across 92 innings for Seattle before he was traded to Houston), it wound up leading to perhaps his greatest impact.

After offseason discussions with sportswriter Leonard Shecter (who would later edit the book), Bouton decided to write a season-long diary of the 1969 season, and that wound up being Ball Four. It was a book that didn’t go over well with many in Major League Baseball at the time, especially given its frank descriptions of players’ sexual exploits, amphetamine usage, heavy drinking, obscene jokes and much more; it even led to MLB commissioner Bowie Kuhn calling it a “grave disservice” and “detrimental to baseball” and trying to make Bouton sign a statement saying it was completely fictional (Bouton refused and insisted it was accurate). And it also led to the Astros burning a copy in their dugout and to Pete Rose reportedly yelling “Fuck you, Shakespeare!” when Bouton was on the mound against his team in 1970.

But Ball Four was hugely popular (and still is), and it’s made a massive mark over the years; as Niemietz and McShane noted, it’s the only sports book on the lengthy “Best Books of the Century” list the New York Public Library put together in the late 1990s. And it featured heavily in the many tributes to Bouton on Twitter Wednesday; here are some of those.

..for a purpose: criticism, depth, verisimilitude. And I became a student of his work. Years later we met and he said he was a fan and I said “I should hope so. I’ve been stealing your act for 25 years.”

We became friends. I wound up IN the final revised edition of “Ball Four” pic.twitter.com/wAaPgUbfnO

Jim Bouton RIP. Ball Four read revelatory to me as a teenager, almost like Hunter S Thompson on politics. ⁦@TylerKepner⁩ did a nice story on him a couple years back about his struggle with dementia https://t.co/R80xLa5Mdl

A funky farewell to the late, great Jim Bouton, a brilliant man and an amazing character, whose books profoundly shaped the way I (and so many others) would forever view baseball. Rest in Peace, Bulldog. pic.twitter.com/2kLueDNHvI

Bouton did a lot beyond Ball Four, including leaving baseball to work as a sportscaster for New York’s WABC and later WCBS. He then tried a baseball comeback in the mid-seventies, and wound up pitching in the big leagues again with the Atlanta Braves in 1978. He also wrote further books, including 1971’s I’m Glad You Didn’t Take It Personally (on the reaction to Ball Four, with a title coming from sportswriter Dick Young’s response to him in a conversation about how Young called Bouton and Schecter “social lepers”), 1995’s Strike Zone (a baseball novel, co-authored with Eliot Asinof) and 2003’s Foul Ball (on his unsuccessful attempt to save a historic stadium in Massachusetts). And Bouton also turned Ball Four into a short-lived CBS sitcom in 1976, co-writing it with Newsday TV critic Marvin Kitman and New York Post sportswriter Vic Ziegel, and playing “Jim Barton” himself. But it’s the book of Ball Four that most will remember him for, and the impact that book made still resonates in the sports world. Our thoughts go out to Bouton’s family and friends.

[The New York Daily News; photos from Dan Epstein on Twitter and from NPR.]