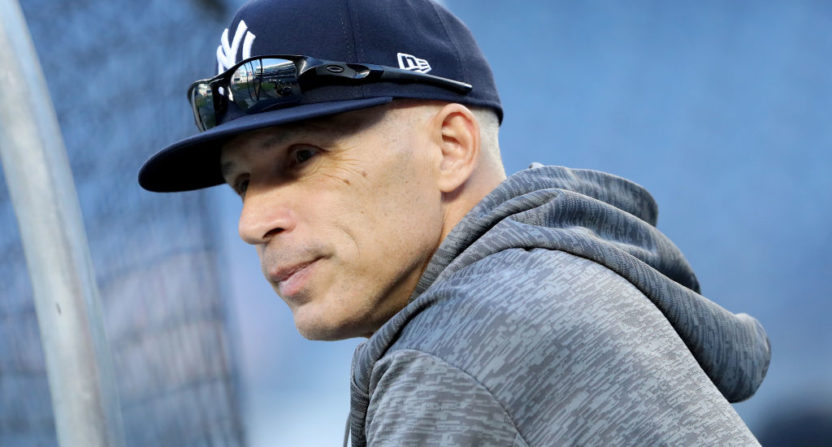 The Yankees would likely have won Game 2 of the ALDS against the Indians on Friday if Joe Girardi had simply challenged an erroneous hit-by-pitch call in Cleveland’s four-run sixth inning. Had the Yankees manager asked for a replay, umpires would have seen that the ball hit Lonnie Chisenhall’s bat before caroming into catcher Gary Sanchez’s glove for a tipped third strike; then they would have reversed the ruling and ended the inning.  Instead, Girardi let Chisenhall take first base, and Francisco Lindor knocked a grand slam a batter later to cut the Yankees’ lead from five runs to one, in an eventual Indians win.

Girardi took flak from the moment he declined to challenge, then made things worse after the game by saying, preposterously, that he had declined to challenge because doing so would have thrown off his pitcher’s rhythm. On Saturday, he took a little more ownership of the mishap, saying that he “screwed up” and “feels horrible about it.”

Joe Girardi: “I take responsibility for everything, and I feel horrible about it.”

Joe Girardi: “I screwed up. It’s hard. It’s a hard day for me. But I’ve got to move forward and we’ll be ready to go tomorrow.”

That mea culpa is not going to satisfy the many Yankees fans calling for Girardi to lose his job, but at least it’s something.

Most observers consider Girardi a good (or at least above-average) manager, but Yankee fans have begun to get restless after nine seasons of him at the helm. After earning top marks Tuesday for his bullpen maneuvering the AL wild-card game, he was pilloried Friday not only for the failed challenge but also for several bullpen decisions—from removing CC Sabathia at 77 pitches to leaving in Chad Green to face Francisco Lindor to allowing David Robertson to start the eighth to allowing Dellin Betances to start the 13th. We can debate all day whether or not those moves were smart in the moment, but they all back-fired, and they all incited the ire of pundits and fans.

The Yankees now trail the Indians 2-0 in the ALDS, and need a win Sunday to stay alive. If they instead lose and wind up swept, Girardi might have some angry bosses to answer to.