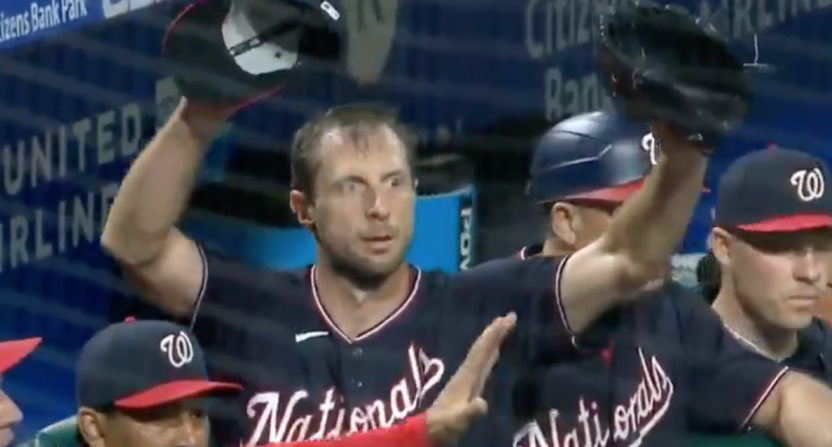 Major League Baseball’s new policy to check pitchers for foreign substances went into effect Monday and it only took one day for the new rules to ignite tensions on the field.

Max Scherzer: not a fan of sticky substance checks. 🤣 pic.twitter.com/ErQq9TmnGH

Washington Nationals pitcher Max Scherzer showed his disdain at being checked by umpires between innings Tuesday night, looking like a traveler going through TSA at the airport as his cap and glove were examined for sticky stuff. Starting pitchers can be checked twice a game, according to the new rules, and Scherzer made it pretty clear how he felt about this policy being implemented more than 70 games into the season.

Another aspect of checking pitchers is the opportunity for gamesmanship from managers. As ESPN’s Buster Olney wrote, MLB managers have operated under a “gentlemen’s agreement” under which they wouldn’t ask umpires to check the opposing pitcher for foreign substances or objects. Presumably, this is because managers knew their guys were using something too and didn’t want them checked.

But that agreement apparently no longer applies with these new rules. MLB teams that believe they’re playing clean want other clubs to operate by the same standard. So if executives, managers, and players believe someone on the other team is cheating with sticky stuff, they’re going to ask umpires to check pitchers.

Philadelphia Phillies manager Joe Girardi showed how this is going to be played during the fourth inning, asking the umpiring crew to check Scherzer while he was on the mound. Scherzer, as you might imagine, was furious, tossing his cap and glove to the grass, then unbuckling his belt. Maybe he was offering his belt to be checked or he was ready to drop his pants to make the umpires conduct a more thorough search.

As many pointed out on social media, this is exactly the visual MLB didn’t want in having umpires check pitchers.

For one thing, checking Scherzer held up play. And he’d already been checked the requisite two times. Nationals manager Dave Martinez also took issue with Girardi, pointing and yelling at the Phillies dugout. But Scherzer making a mockery of being checked by threatening to drop his pants on the field demonstrated how irritated pitchers are with these new rules — especially when they’re being enforced mid-season and during a ballgame.

However, if Girardi wanted to rattle Scherzer, it didn’t work. Though two Phillies reached base due to an error on Starlin Castro and a walk to Brad Miller, Scherzer got out of the inning without allowing a run with a strikeout, fly-out, and foul pop-up. And on his way back to the dugout, Scherzer stared down Girardi, letting him know that his tactic failed.

Max Scherzer stares down Joe Girardi, Joe comes out of the dugout and challenges him then gets ejected, Max shows off his glove and hat pic.twitter.com/cjwNfLBHuO

That compelled Girardi to walk onto the field and challenge Scherzer. But challenging him to what, exactly? A fight? Another check of his cap and glove? A heated discussion over whether or not Girardi was doing what he felt was best for his team? A conversation regarding how they feel about these new rules? Plans for a postgame dinner?

Regardless, Girardi’s behavior got him ejected from the game. Oh, and the Nationals beat the Phillies, 3-2. Scherzer earned his sixth win of the season, allowing one run and two hits with eight strikeouts in five innings.

Again, this is only the second day MLB’s new policy has been in effect. And we nearly saw chaos on the field at Citizens Bank Park because of it.

Following the game, Girardi told reporters that he asked Scherzer to be checked because he noticed the Nats pitcher wiping his head, which he hadn’t seen before. But if Scherzer was getting sweat to mix with rosin for some grip, well, that’s allowed under the new rules.

Joe Girardi: "I’ve seen Max a long time. Since 2010. Obviously he’s going to be a Hall of Famer. But I’ve never seen him wipe his head like he was doing tonight ever. … It was suspicious for me. … I didn’t mean to offend anyone. I’ve just got to do what’s right for our club."

This surely isn’t the last time we’ll see something like this as pitchers resent being singled out and scrutinized for something that was allowed for the season’s first 70-plus games. Managers will continue working the rule to try and gain an advantage too, especially in a competitive game with division standings and league seedings at stake. (The Phillies and Nationals entered Tuesday night tied for second in the National League East at 34-36.)

It’s a mess that MLB could’ve avoided. League officials had to know that implementing this policy would be hugely disruptive and raise tensions (and even lead to injury, as Tampa Bay Rays pitcher Tyler Glasnow believes). A summer full of “substance theater,” as one fan called it on Twitter, will not create the highlights baseball wants or needs. And we may see Scherzer drop his pants before the season is over.

Max Scherzer: "I'll take off all my clothes if you want to see me. I've got nothing on me."