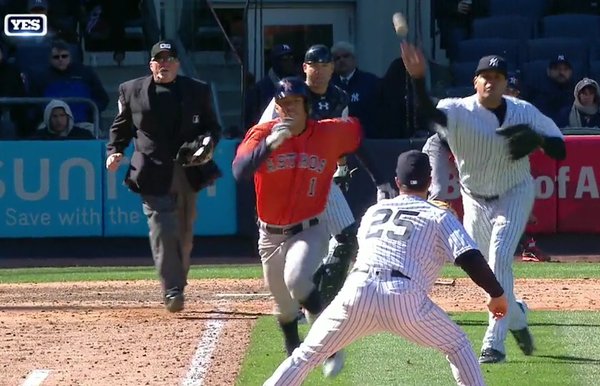 The Yankees lost their first game of the season Tuesday when the Astros scored three runs off Dellin Betances in the eighth inning thanks largely to an error that left manager Joe Girardi angry at the MLB rulebook.

With the score tied at 2 and Jose Altuve on second base, Carlos Correa hit a dribbler down the first base line that Betances fielded and promptly flipped way over first baseman Mark Teixeira’s head and into right field. Altuve scored on the error to give Houston the lead, then the Astros added two more runs in the inning and went on to win 5-3.

Girardi stormed onto the field to protest, arguing that Correa was interfering with Betances’ throw by running on the grass, which… well he appears to have a point:

One of these years, MLB will address plays like this. But they can only handle one baserunning matter per winter. pic.twitter.com/kepNpgpToG

Correa is pretty clearly running on the grass, not in the designated baseline that exists precisely to avoid interference with a throw up the line.

With this in mind, Girardi declared that the Yankees would play the rest of the game under protest.

After the game, umpire Dana DeMuth argued that the play could not be interference because Betances’ throw was so high, which seems kind of circular since the throw was clearly only high because the runner was in the way. DeMuth said the only way interference would be called in that situation would be if Betances hit Correa with the ball, which isn’t in anyone’s best interests.

"Do it. Throw it into the runner's back" – crew chief Dana DeMuth pic.twitter.com/WZZY5n0eMw

Speaking postgame, Girardi moved on from berating the umpires and began berating the rulebook.  Via FTW, here’s what Girardi said about the play:

“So to me, it’s something that probably needs to be looked at…. What’s Dellin’s option there? Hit him in the back? Is that really want we want?

“They would have called him out if he hit him. That doesn’t make any sense to me, because now you’re asking one of our players to assault theirs.”

This seems like a rule MLB might want to look into. Throwing the ball at someone to get him out should probably be reserved for playground kickball.