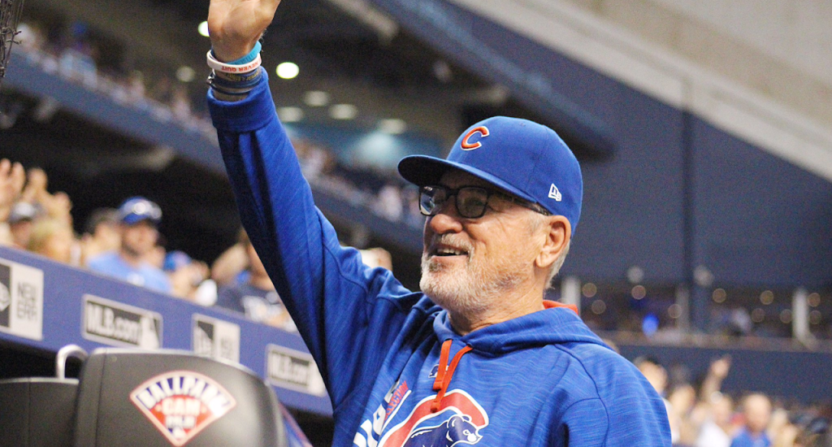 While the writing may have been on the wall since last offseason, when Cubs president Theo Epstein elected not to offer Maddon an extension, there was still always the chance that Maddon could have earned one in 2019.

Instead, his lame duck season ended up kind of a disaster, the Cubs falling apart at the end of the season to miss the playoffs entirely for the first time since 2014. That combined with Epstein’s desire for a new voice led to this news, officially reported this morning but apparent to just about everyone for weeks now:

Joe Maddon will not return as Chicago Cubs manager.

Their record was worse than peripherals suggested it should be, and poor injury luck certainly didn’t help the team. But on the other hand, Maddon’s bullpen management, lineup construction, and the team’s handling of injured players (Maddon’s Cubs had a weird habit of not using the 10-day injured list, instead shortening the bench or even sometimes using players despite being hurt) were all a factor as well.

Maddon also had his share of gaffes, especially surrounding the Addison Russell domestic violence investigation and suspension, moments that turned off quite a lot of the fanbase, and perhaps helped convince Epstein a different voice was necessary.

In the end, Maddon leaves with perhaps the best run of baseball in franchise history, and deserves plenty of credit for the culture change at the beginning of his tenure. The Cubs had been losing a lot for the years ahead of his arrival, and after a few key additions and the emergence of young players Maddon helped foster, the Cubs went from winning 73 games in 2014 to winning 97 games in 2015, a season that ended with an NLCS loss to the Mets.

2016 obviously saw the team win the World Series, thanks again in no small part to Maddon. Another NLCS loss in 2017, and a 95-win 2018 that saw consecutive losses in game 163 and the Wild Card game to miss the playoffs proper weren’t the followups many observers expected from the Cubs, though, and this season continued a downward trend.

That’s clearly not all on Maddon, maybe even hardly any of it is. But there’s only so many things a team can change in one offseason, and given his free agent status and the Cubs desire for a new voice, it does make some sense. There’s no guarantee the next manager is going to be better than Maddon; in fact, there’s actually a pretty strong chance they won’t be. Maddon, meanwhile, will have plenty of options should he decide to jump right back in, which seems likely. (He’d also be great on television; a smart network would scoop him up even just for this October.)

In many ways, the position itself has changed a lot, even in the five years since Maddon left Tampa Bay for Chicago. He’s clearly among the very best of the last school of managers, but Epstein and the Cubs front office are probably looking around at managers like Houston’s A.J. Hinch, Dave Roberts in Los Angeles, Aaron Boone in New York, and thinking that there’s a new voice out there that would be a better conduit for their approach to baseball, while still being able to connect with players.

Who that is remains to be seen, of course, but they’ll have a high bar regardless; only one manager has won a World Series with the Cubs in the last 110 years, and he’s on his way out of town.