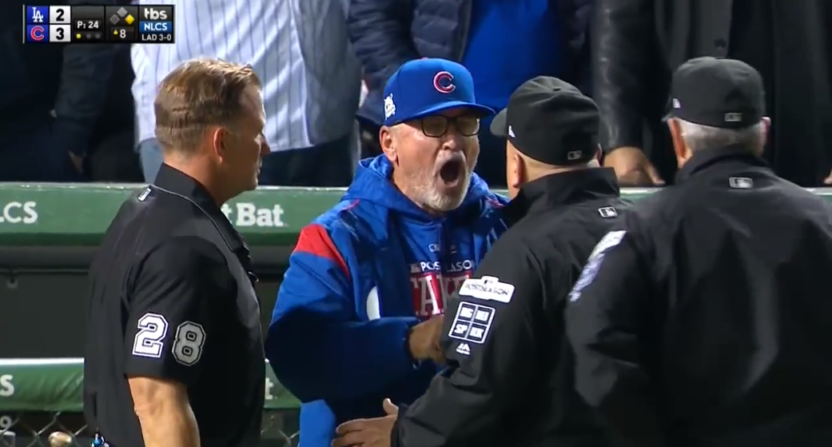 Cubs manager Joe Maddon was ejected in the eighth inning of the Cubs’ NLCS Game 4 victory over the Dodgers on Wednesday night at Wrigley Field, after the umpires made a bizarre decision to overturn a Curtis Granderson strike-three swing to a foul ball. Home plate umpire Jim Wolf ruled that there was no contact made by Granderson on the swing, but Granderson — followed by Dodgers manager Dave Roberts — argued the strikeout ruling, which lead to Wolf meeting with the other umpires to discuss the call.

Wolf’s original call was correct, as you can see here:

After the umpires talked it over, the call was changed to a foul ball. Understandably, the Cubs’ manager was furious (you can read his lips in the following video) and was ejected — for the second night in a row — after he had his say.

But it still all worked out for Wade Davis and the Cubs, as Granderson struck out (again) on the ensuing pitch.

After the game, Maddon was still livid about the call, and especially the explanation, which was apparently that one of the umpires “heard two sounds.” None of them even saw Granderson make contact; they made this call based on sounds (and note that the only one within 80 feet of the play originally called it a swing and miss) in a packed Wrigley Field with 40,000 fans screaming. Absolutely ridiculous.

Maddon said that if Granderson had homered after the blown call/dumb reversal, he might have run out of the Wrigley clubhouse in his jockstrap.

“If Granderson hits the next pitch out, I might come running out of the clubhouse in my jockstrap. That was really that bad.”

Let’s all be thankful that Granderson didn’t homer.

Wolf admitted after the game that his crew blew the call.

Home-plate umpire Jim Wolf on controversial foul-tip call in Game 4: "After looking at it, I was dead wrong."#Cubs

The Cubs’ win holds off the Dodgers’ pennant-clinching efforts for at least one more day. Clayton Kershaw and Jose Quintana will battle in Game 5 at Wrigley Field on Thursday night.