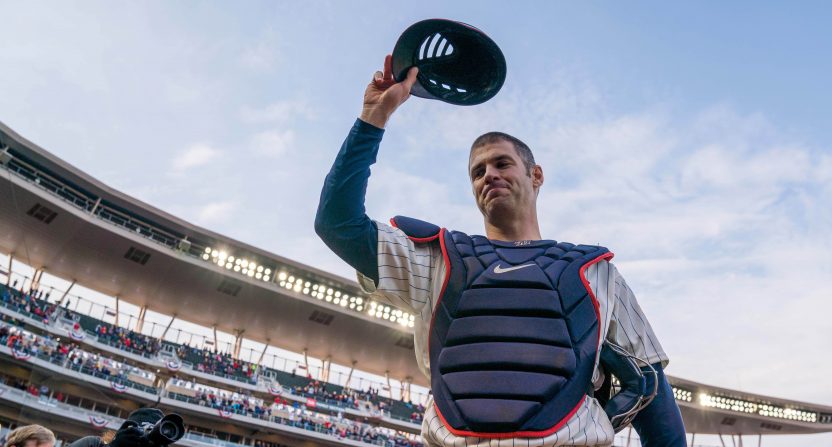 When the Twins drafted Joe Mauer first overall in 2001, it was a move widely seen as a cost-saving effort. The Twins taking the local high school star over Mark Prior, considered then perhaps the most sure-thing pitching prospect ever, was widely mocked, while the Cubs were viewed as incredibly lucky to have Prior fall to them at #2.

Seventeen years and some admittedly bad injury luck later, it’s pretty clear the Twins got the best player in that draft. Now, after fifteen seasons with Minnesota, Mauer is walking away from the game.

Mauer announced his decision via a letter posted at the Twins site:

After much consideration, I have decided to retire from playing baseball. This decision did not come easily as baseball always ahs been, and always will be, one of my greatest passions. The last few months of this season were very emotional for me and I wanted to take time to separate some of those emotions and think with a clear frame of mind.

Mauer has suffered multiple concussions, including a severe issue in 2013 that ended up essentially ending his days as a full-time catcher. Mauer addressed those concerns very early on in his letter:

The risk of concussion is always there, and I was reminded of that this season after missing over 30 games as a result of diving for a foul ball. That’s all it took this time around and it was all I needed to bring me back to the struggles I faced in 2013. The concussion I experienced that season not only changed m life professionally with a move to first base but changed me personally as well.

After my concussion this season I found myself wondering about “what if” situations. If I were to continue playing this game I would want to do so without reservation and I no longer feel that is possible. There is a part of me that will always want to compete, but I have reached a point where my desire to play is outweighed by the possibility of another injury. Experiencing a concussion looks different for everyone, but my personal experience forced me to look beyond baseball at what is best for me as a husband and father.

Mauer ends his career having played for no franchise other than the Twins. That unfortunately meant he only made the playoffs four times, including three ALDS sweeps and one Wild Card game loss. Mauer did however finish his career with an MVP award and $218 million in career earnings, and he’s a borderline Hall of Fame candidate who should probably get in, especially when you consider his peak as a catcher. It’s fun now (well, not for Cubs fans or for Prior himsel) to look back at how we viewed the 2001 draft.

Mauer was the National Player of The Year in both baseball & football. He was the top football prospect in the country. Pretty good athlete.

If both players were coming up today, their respective floors and ceilings might look a lot closer. Mauer’s elite athleticism and posititional value would boost his ceiling, while the greater appreciation for the fragility of pitchers would have likely lowered Prior’s floor. The Twins and baseball will miss Mauer, but if he’s happy leaving now, he certainly doesn’t owe anyone anything more.

That his retirement means he won’t spend a few years with another random team is a nice bonus.