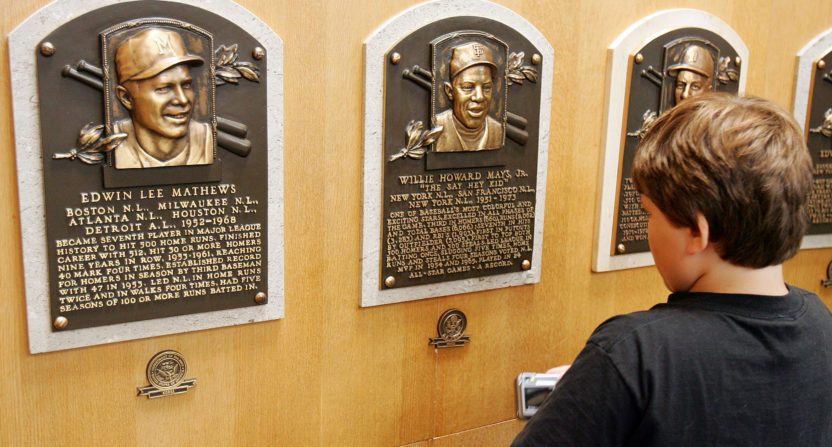 It’s Baseball Hall of Fame season, which means spirited, high-pitched arguments about not only the merits of players on the ballot but also the moral implications of what drugs those players put in their body.

On Tuesday, Hall of Fame voters from the Baseball Writers Association of America received a letter from Hall of Famer Joe Morgan imploring them to leave players who used performance enhancing drugs out of Cooperstown. You can read the whole letter here, but this is the gist:

We hope the day never comes when known steroid users are voted into the Hall of Fame. They cheated. Steroid users don’t belong here.

Players who failed drug tests, admitted using steroids, or were identified as users in Major League Baseball’s investigation into steroid abuse, known as the Mitchell Report, should not get in. Those are the three criteria that many of the players and I think are right.

In his letter, Morgan acknowledges that he does not speak for all Hall of Famers, but his letter reportedly came from the official Hall of Fame email address, giving it the veneer of an official statement.

Naturally, Morgan’s Hall-sanctioned input has sparked many loud arguments. Bonds and Clemens defenders have pointed out there are loads of cheaters in Cooperstown, from Pud Galvin and his 19th century elixir to Gaylord Perry and his spitball, and that steroids are different in degree but not kind from the amphetamines that were popular in the 1960s. Meanwhile, fans and media members who oppose Bonds, Clemens, Sammy Sosa, Mark McGwire, Rafael Palmeiro, Alex Rodriguez, etc. have spent their day arguing the evils of performance-enhancing drugs.

I have always believed that leaving overwhelmingly great players like Barry Bonds and Roger Clemens out of Cooperstown was silly, melodramatic, and logically inconsistent. Others still feel so burned by the Steroid Era that they’re willing to eternally punish its perpetrators. Though perception of them has seemed to lighten up a bit in recent yeas, the debate is far from settled.

In fact, the one thing that Morgan’s letter tells us conclusively is that we’re a long way from being done with PED-related Hall of Fame arguments. If Bonds and Clemens fail to gain induction, their supporters will complain for all eternity. And if they do find their way to Cooperstown, a constituency of fans, players and reporters will be very, very aggrieved.