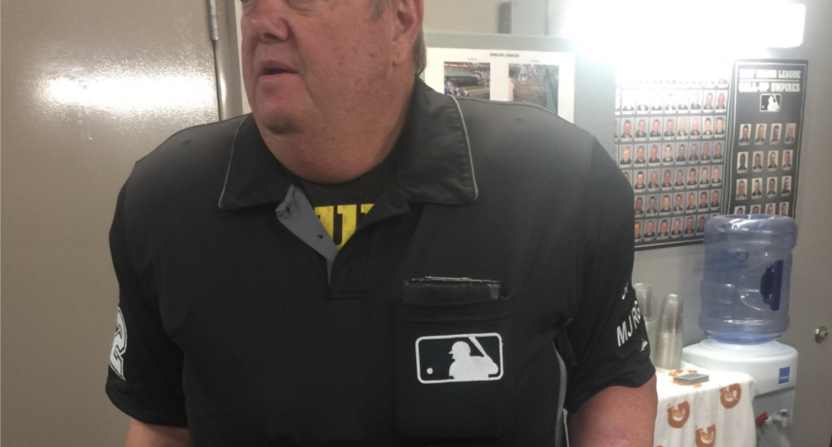 In a society where many of us expect our officials and referees to be perfect, it’s important to consider that these people are human and humans make mistakes. But there is also a thing as perspective and this is just…something else.

Umpire Joe West has been infamously patrolling MLB ballparks officiating games since 1976. West is a pretty accomplished umpire, officiating six World Series, but West has the reputation for trying to make the game all about him and seems to give off a vibe where he thinks everybody is watching and attending a baseball game for him and that’s simply not true. A rule I follow is that if you know the name of a referee, most of the time that’s not for a good reason. A lot of people (unfortunately) know who Joe West is.

Anyway, West as well as the other umpires are wearing white armbands to protest verbal attacks on umpires. This stemmed from a situation where Detroit Tigers second baseman Ian Kinsler openly criticized longtime umpire Angel Hernandez feeling Hernandez was changing his strike zone and put it very bluntly that Hernandez was “messing with baseball games, blatantly,” and said Hernandez “needs to find another job, he really does.” The World Umpires Association called for a suspension for Kinsler for his remarks but only received a fine. Because of that, umpires are protesting the decision.

West is the most notable umpire to be wearing a wristband as he is behind home plate for the Blue Jays-Cubs game. West himself has been in trouble and was recently suspended for three days when he was asked and said Rangers third baseman Adrian Beltre was the “biggest complainer in baseball.”

Anyway, fans gave the social media equivalent to rolling their eyes after seeing West wearing his white armband. The protest really got outrageous as West called strike three on Cubs left fielder Jon Jay as two of the three strikes were outside of the typical strike zone and then stared Jay down as if he’s a prison warden trying to get Jay to react to him knowing that if Jay did, he was ready to throw him out.

I’m all for treating umpires with respect but doing things like this and acting as if you’re God’s gift to baseball doesn’t help your cause. And when a mistake is made, maybe it would help to admit that mistake instead of the umpires just being silent and never explaining why they made the call they made. Sometimes, what we feel is a mistake can be a right call or at the very least, a right call to the umpire given their angle of the play. When Jim Joyce made the wrong call that cost Armando Galarraga a perfect game, Galarraga had a right to be furious. Joyce admitted he made the wrong call and apologized and Galarraga accepted his apology. And in that situation, Joyce was more upset with himself than anyone else. That’s how you handle something like that.

Joyce doesn’t really do that and people noticed.

Example 5940634799 of why Joe West is the worst umpire in MLB. Jay got fleeced in a big spot #Cubs pic.twitter.com/6F5htfYLfm

Joe West antagonizes players and has done so for years.

This whole wristband thing is a farce.

Joe West is an embarrassment to his chosen profession. He's the model of everything done wrong

Joe West, wearing white wrist band to protest verbal attacks on umps, glares at Jon Jay as he heads back to dugout ticked at strike 3 call

Definition of Irony: Joe West protesting treatment of umpires when he's one of the biggest glory-hogs who put themselves before the game…

#joewest "Joe West" is the most confrontational ump in the history of MLB. He believes the game is about HIM. It's not, Joe. Grow up.

Perhaps all the MLB players should wear bands protesting Joe West and Angel Hernandez still having umpire jobs in MLB.

In solidarity with Angel Hernandez, Joe West is making some lousy ball/strike calls.

Really, this is why I hope that someday a computer just decides balls and strikes. I know I’m pissing off traditionalists who feel having an umpire behind home plate is “part of the game” but do you seriously want to see Joe West put his random strike zone in place and make himself a part of every game he’s in? Maybe we can compromise, still have an umpire behind home plate but they give the call that the computer tells them. Surely, Joe West can’t screw that up.