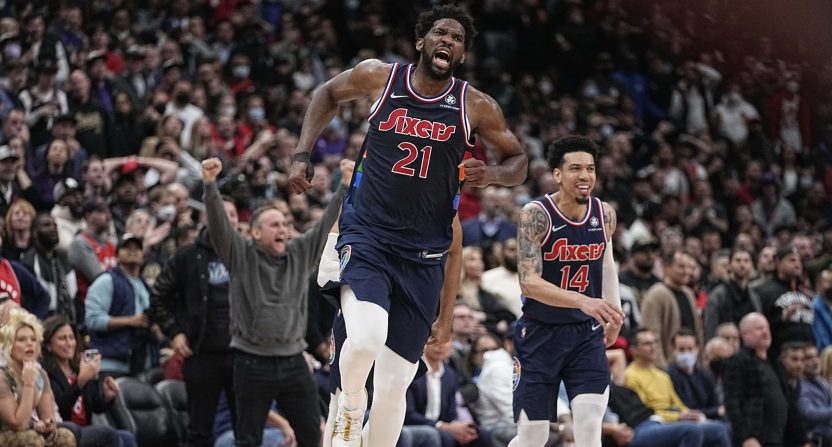 Despite holding a commanding lead in their series against the Toronto Raptors, the Philadelphia 76ers got some bad news on Friday relating to their star and MVP candidate, Joel Embiid.

Shams Charania of The Athletic reported on Friday that Embiid has an injury to his right thumb. At least for now, though, the 76ers will not miss his services, as he’s planning on playing through it.

There is fear that Philadelphia 76ers All-NBA star Joel Embiid has a torn ligament in his right thumb, but Embiid has vowed to continue playing through the injury, sources tell @TheAthletic @Stadium. Embiid will rely on his pain tolerance and 76ers‘ medical staff.

We’d say that this was not welcome news for the 76ers and their fans — but that would be a dramatic understatement.

Everything I love dies. #Sixers https://t.co/orhclWPMCQ

Man, what? How? Injuries becoming an even more significant postseason factor than usual. https://t.co/8TfU0MSbtM

Wow. Hope he is okay to play against Miami next series. https://t.co/9XkpNbNJsc

Everybody else with the injuries I get. It happens. Joel is injured every post season. More of the same for him. https://t.co/vAYvyVTgfB

In the short term, this certainly bolsters Toronto’s chances in the ongoing Eastern Conference quarterfinals series between the two teams.

Raptors +4000 to win the series on @DKSportsbook.https://t.co/bPTDxCO3uo

Realistically, though, Philadelphia should be fine against Toronto. The 76ers presently lead the series 3-0 and are going for a sweep on Saturday afternoon. Even if the Raptors win that game, Game 5 would be in Philadelphia — where the 76ers won the series’ first two games by decisive 20 and 15-point margins, respectively. Embiid being limited will hurt Philadelphia but chances are, the 76ers will get through this series.

Beyond that, though, it’s more of a mystery. Even if Embiid plays, will he be at his best? If they’re going to continue to advance through the Eastern Conference playoffs against increasingly tough competition (including a likely matchup against the No. 1 seeded Miami Heat in the next round), the 76ers will need Embiid at top form.