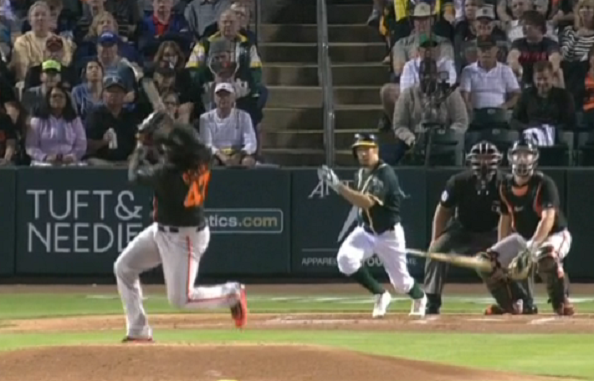 The first pitch Johnny Cueto threw on Monday night in Arizona turned into what had to be one of the scariest moments of his life.

Oakland Athletics outfielder Billy Burns smoked a line drive back at Cueto, nailing the San Francisco Giants pitcher right in the forehead. The ball ricocheted all the way into right-center field for a Burns double.

Cueto went down on all fours briefly, before talking to the San Francisco trainer and manager Bruce Bochy, and stunningly staying in the game. The right-hander ended up throwing three innings and allowed three earned runs.

It seems pretty ridiculous that Cueto would stay in the game after that, especially given that it’s, you know, A SPRING TRAINING GAME.

And given that it involves a pitcher the Giants JUST SIGNED TO A SIX-YEAR, $130 MILLION CONTRACT, the decision seems even more perplexing.

Well, eventually, the Giants sent Cueto back to the team facility in Scottsdale to be examined by team doctors for a contusion and possible concussion symptoms (via ESPN):

The team initially said he was taken to a hospital for precautionary reasons before clarifying that team doctors were handling his care. Manager Bruce Bochy said Cueto was being treated for a contusion and monitored for concussion symptoms.

“We are going to monitor him tonight, tomorrow for concussion symptoms, but he’s shown no sign of that, so he’s just being treated for a contusion,” Bochy said after the game. “He responded well out there. It’s why he stayed in the game; he answered all the questions from our trainer out there. … He wanted to stay out there. We did take him back to have our docs look at him at our complex.”

It’s good to hear that the Giants don’t think Cueto has a concussion, but it still just makes no sense that they wouldn’t immediately take him out of the game to examine him more for it, to be safe.

What makes it even more questionable is MLB.Com’s Chris Haft notes that Cueto looked confused on the first play following the line drive:

Cueto looked confused when the next batter, Mark Canha, dribbled a grounder between the pitcher’s mound and first base. Cueto initially pursued the ball, then backed off in the belief that first baseman Brandon Belt would handle the play. Canha collected an infield single, which preceded Reddick’s homer.

Haven’t we learned anything by now when it comes to concussions? Play it safe (especially in an exhibition game).