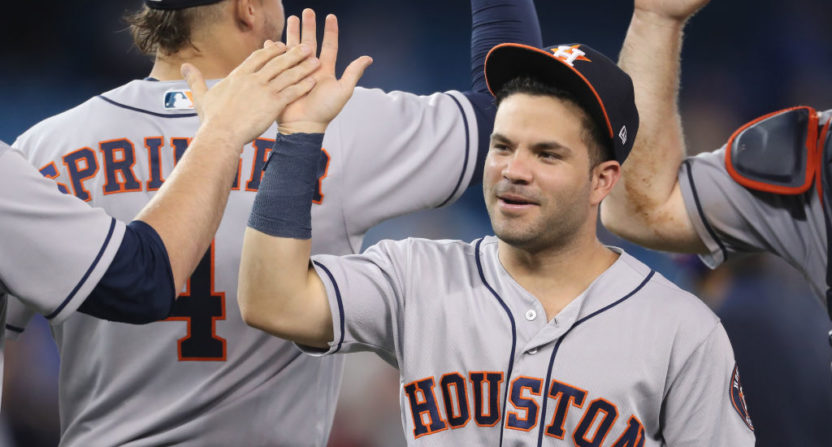 Given all the superior ways to measure offensive performance, we shouldn’t rely solely on batting average to make the case that Altuve—fresh off a hot streak few players can dream of—is having an incredible, MVP-caliber season. Luckily, we don’t have to. Here are the Astros’ second baseman’s AL ranks in notable statistical categories:

In the midst of Altuve’s incredible season, it’s tough to overstate the craziness of this 5-foot-6-inch second baseman becoming one of the greatest baseball players in the world. When Altuve reached the Majors in 2011, he looked like a fifth-infielder type. By the time he earned his first All-Star bid the next year, he had proven himself a useful starter. When he won the AL batting title in 2014 while leading the league in stolen bases, he was a slap-hitting star, a classic leadoff-hitting type. But he didn’t stop there. Over the past two or three years, Altuve has added power to his game, and he now boasts a gaudy .575 slugging percentage.

How ridiculous is that? Here are the heights and weights of the AL leaders in that category:

Yep, the smallest player in the Major Leagues slugs like a 6-foot-4 behemoth. Ever since Altuve solidified his place in the Astros lineup, his slugging percentage has been on the rise—from .363 in 2013 to .453 to .459 to .531 to this year’s .575. If he maintains that figure over the rest of the year, it will be the fifth best slugging percentage for a second baseman since World War II.

Most players who start hitting for power sacrifice contact, but Altuve’s contact rate has fallen off only slightly as he’s become a fearsome (if diminutive) slugger, and he’s about to win his second straight batting title while knocking 20 home runs in both seasons. Somehow he has added Joe Morgan’s extra-base power to Rod Carew’s contact skills, while possessing the stature of a high-school freshman.

Altuve’s remarkable season hasn’t quite gotten the attention it deserves. For the first half of the season, AL MVP talk was dominated by Aaron Judge, the massive rookie whacking (very) long balls in America’s biggest city. Around the All-Star Break, Altuve’s double-play partner Carlos Correa went on a tear, fulfilling his superstar expectations and garnering some MVP buzz himself. All along, Altuve hummed along among the AL leaders in all the relevant categories, having a typically excellent season but not a historic one.

Then Altuve ran off one of the best streaks in recent memory. From July 4 through July 31, the second baseman was 41-for-92 with 15 extra-base hits, for a .511 batting average and 1.317 OPS. Now Altuve has joined a slumping Judge (.164/.313/.343 since the All-Star Break) atop the AL MVP conversation. If the season ended today, he might have a slight edge.

An MVP award would be an appropriate exclamation point on one of the most improbable careers in recent baseball history. A non-prospect considered too small to stick in the Majors makes an All-Star Game, then wins a batting title, then gradually adds power and blossoms into a true five-tool do-it-all player who ranks among the best in the league by any measure.

Whenever we get used to Jose Altuve being a great player, he gets even greater. He finished 13th in MVP voting in 2014, 10th in 2015 and third in 2016, surprising the baseball world every time. Today, he’s the AL MVP favorite with the type of batting average we’ve barely seen this century. Tomorrow, who knows.