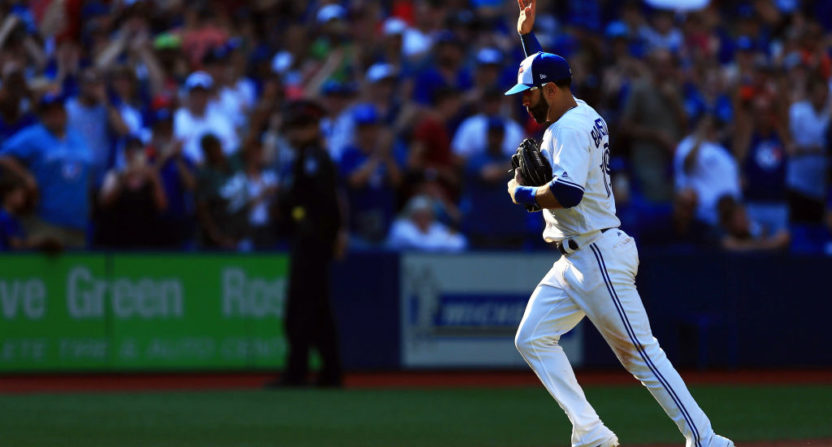 Jose Bautista’s career with the Toronto Blue Jays is probably over, but the 36-year old (37 later this month) isn’t ready to completely close the door on his MLB career quite yet.

Talking with SportsNet following the Jays’ season finale with the Yankees on Sunday, Bautista talked about getting ready for the 2018 season with whatever club he’s with.

“All I can do is get ready for next season and be ready to contribute to the team that I’m with at that time. Right now I’m a Toronto Blue Jay, and that hasn’t changed. I’ve said it all along, this is where I want to be and finish my career. We’ll see what happens in the future. It’s out of my control now.”

Thankfully, Bautista doesn’t seem too fixated on playing every day but just wants to contribute.

“Contributing to daily wins is what it’s about for me,” he said. “I tried to focus that on this year. I did an OK job, not as good as I’m used to, not as good as everybody’s used to seeing me, and that’s OK. There are good and bad years and for the most part my work tool, which is my body, is great, and all I’ve got to do is stay ready to go.”

That’s all well and good, and I have all the respect in the world for Bautista for wanting to continue playing.

But let’s face facts here: He should probably retire.

2017 was by far the worst year of Bautista’s career in Toronto. Over 157 games, he slashed just .203/.308/.366, all of which were career lows. He still smashed 23 home runs, but that isn’t too special in 2017 – 94 players hit 23 home runs, including players with similar limitations as Bautista in Hanley Ramirez, Mark Trumbo, and Albert Pujols. Furthermore, Bautista struck out at a career-high 24.8% clip, and while his 12.2% walk rate was still better than the league average, it was his worst mark since 2008.

Bautista also isn’t much of a fielder — he logged -8 DRS and 0.1 UZR this season in right field, continuing his recent trend of being mediocre (at best) in an outfield corner.

Ryan Howard isn’t a great comp for Bautista, but following a 2016 season in which he hit .196/.254/.453 with 25 home runs in part-time duty for the Phillies, he couldn’t get a job until after the season started – and even then, it was in AAA. Howard was old (turning 37 after the 2016 season), couldn’t play every day, couldn’t play defense, hit for power, and didn’t do too much else. There was no market for his services.

The same thing will likely happen to Bautista this offseason. A National League team likely won’t give him much interest since he can’t play much defense. An American League team would likely only have interest in him as a bench bat, but given the rise in young, cheap, positionally flexible players coming up through many farm systems, why roll the dice on a veteran like Bautista, who probably doesn’t have much left in the tank?

Bautista’s place in baseball history is secure, thanks to one of the most iconic moments in Postseason history. He doesn’t need to keep hanging on for one more shot at a ring, starting once a week and pinch hitting for a team no one identifies him with. Just let it go, and enjoy the rest of his life.