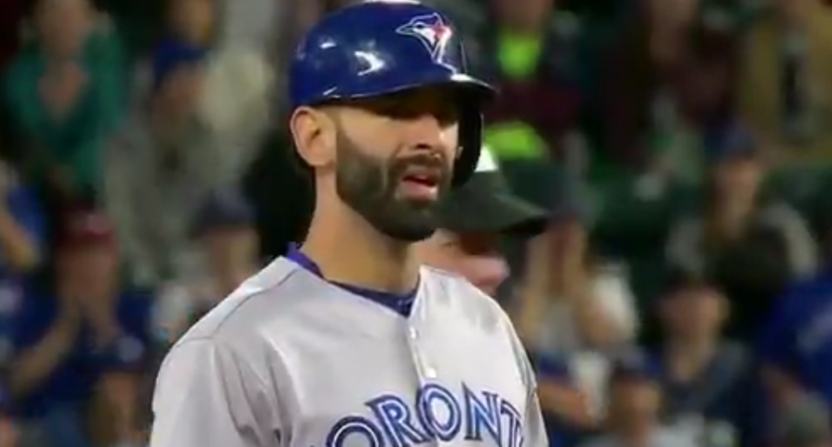 A walk doesn’t always result in only one base. Toronto Blue Jays’ right fielder Jose Bautista proved that Saturday night in Seattle against the Mariners, drawing a walk against Tony Zych in the top of the eighth and then taking second base when Zych and the rest of the Mariners’ infield were caught napping:

Jose Bautista catches the Mariners off guard for quite possibly the best stolen base of the season. #BlueJays pic.twitter.com/1pS9kIU7st

Yep, that’s a stolen base by MLB rules, and it’s perfectly legal; the walk entitles you to first, but you can keep going at your own risk. Unlike many two-base walks, though, this wasn’t from a wild fourth ball, a bad throw back to the pitcher, or the actions of runners elsewhere. Instead, Zych and the Mariners just didn’t see it coming, with no one even covering second base. The reaction from Seattle manager Scott Servais on that clip, with him yelling and pointing at Bautista, is particularly funny. (And it’s notable that there was an error the other way the previous inning; when the Mariners’ Jarrod Dyson tried to steal second in the bottom of the seventh, the throw went into center field and Troy Tulowitzki missed it, letting Dyson come all the way around to score and tie the game 2-2.)

This didn’t wind up in a run, as Kendrys Morales grounded out to end the inning on the ensuing at-bat. But it didn’t matter, as the Jays would add another run in the 9th and win 4-2. And Bautista wound up with an extra stolen base, his fourth of the season. Not bad for a 36-year-old, and proof that it’s always worth paying attention to what’s going on around you. Sometimes, it can lead to an easy extra base.