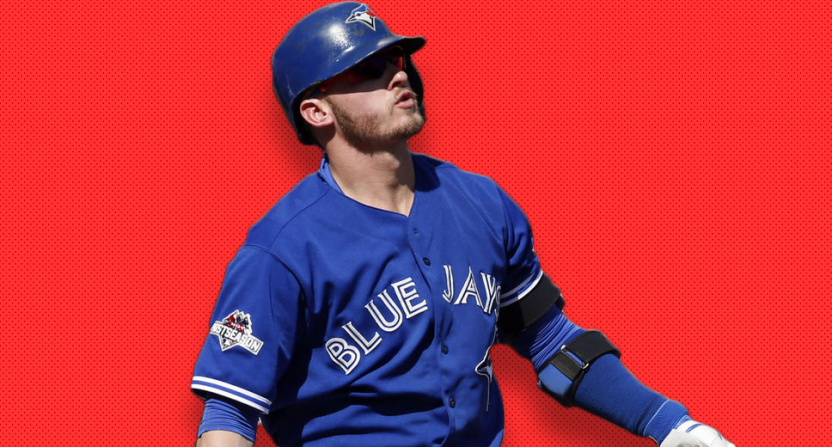 In 2015, the Blue Jays spent big to win the World Series. Big money, big names, and a lengthy postseason run cemented the club’s status as contenders. The team didn’t win it all. And now, three years later, they’re dismantling an expensive, broken squad piece by piece.

On Friday night, Toronto traded All-Star Josh Donaldson to the Cleveland Indians for what’s expected to be a minuscule return – a move which would be shocking to fans just last season (Update: It’s a player to be named later going to the Blue Jays).

Sources: Josh Donaldson has been told he's been traded to the Cleveland Indians.

Donaldson — the 2015 AL MVP — was one of the best players in baseball over the past three seasons, playing Gold Glove-caliber defense, getting on-base at a terrific clip, and socking dingers with the best of them.

OFFICIAL: We've acquired Minor League OF Demi Orimoloye from the @Brewers in exchange for OF Curtis Granderson. pic.twitter.com/hLrQKIxNZt

Unfortunately for both the fourth-place Blue Jays (61-73) and Donaldson, the third baseman began the 2018 season with a dead arm, couldn’t hit worth a lick due to injury issues, and spent a majority of the season on the disabled list. In 36 games, Donaldson hit five home runs, with 16 RBI, a .234 average, and a .333 OBP. Donaldson’s relationship reportedly hasn’t been hunky-dory for with management, either.

Donaldson on his situation with the #Bluejays front office this year: “There’s a lot I can say about that but I choose not to say anything about it right now. There will be a time."

The move is sure to agitate some Blue Jays fans. The idea of trading a franchise star for a mystery return may seem jarring.

But Toronto had little choice in dealing the third baseman. Donaldson could’ve landed draft pick compensation if he signed a qualifying offer this summer, but an almost entirely lost season meant he may consider re-signing to an approximately $20 million QO, leaving a rebuilding team with an expensive oft-injured player. Additionally, the Blue Jays may prefer the prospect return from the Indians over the draft pick compensation anyway.

Donaldson represents the biggest rebuild band-aid pulled off for Toronto. While there was little doubt the Blue Jays were on that path regardless of a deal, moving Donaldson is another indicator the youth movement is here to stay. He was an aging third baseman plagued with injury issues on a decline. Keeping him now/or in the future made little sense.

What’s next for general manager Ross Atkins and president Mark Shapiro will be a challenge.

Sitting atop Toronto’s payroll are 33-year-old Troy Tulowitzki — who won’t play at all this season — and 35-year-old catcher Russell Martin- both necessary remains of a team that went for it and failed. Trading either will be next to impossible with both set to make $20+ million in 2019. Donaldson was one of the few leftovers from the contending team with value (albeit, not much). Getting anything without paying big time for other aging vets won’t be easy.

It’s not all doom and gloom. Toronto has done an excellent job assembling a top-flight minor league system, featuring some of the best prospects in all of baseball. It’s not just a mere coincidence Vladimir Guerrero Jr. — who’s posting absurd numbers in the minors — is a third baseman. I wouldn’t expect to see him up this year, but moving Donaldson clears the way for him in the future. With fellow prospects like Bo Bichette, Logan Warmoth, and pitcher Eric Pardinho among others, Toronto’s future is incredibly bright. But, the present MLB club is being rightfully dismantled to make way.

Contending was a heck of a lot of fun in Toronto. But, ushering in a new Donaldson-less era is the necessary move. He’ll be remembered as one of the franchise’s best players ever. It’s a tough way to end a fantastic run with the team, but the right move entirely.