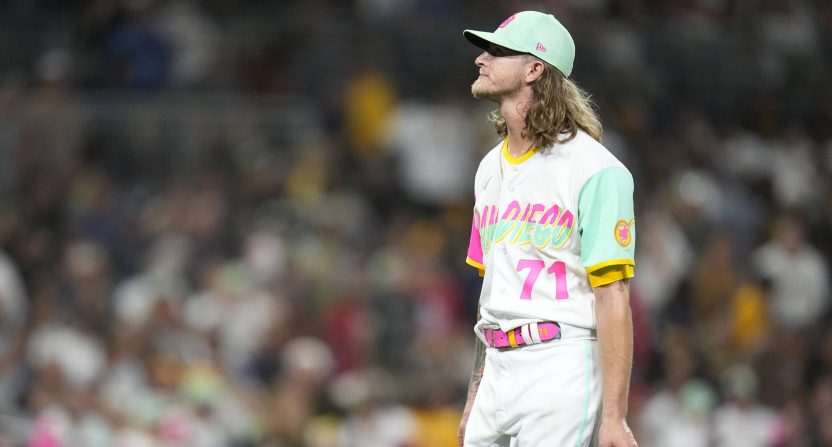 Things were already going terribly for Josh Hader during his tenure with the San Diego Padres. In Friday’s game against the Washington Nationals, they got worse.

Despite his struggles on Thursday, the Padres went to Hader again in the ninth inning of a tie game. Once again, his control did him in — and not just on his pitches.

Hader started the inning off by walking Víctor Robles. Lane Thomas followed and hit a swinging bunt. While Robles was going to advance to second on the play, it didn’t seem like anything worse than a productive out for Hader. Then he fielded the ball and attempted to throw to first. Hader’s throw was errant and went down the right field line. Juan Soto went over to field the ball but it took a bounce off of the wall, getting away from him and allowing Robles to score the go-ahead run.

Thomas went to third on the error and with nobody out, Hader had to pitch for the strikeout. He got the exact opposite.

Alex Call came to the plate and while Hader got ahead 0-2, hit third pitch caught way too much of the strike zone. Call took full advantage and sent the ball over the left field wall for his first career home run.

Hader was then pulled for Luis García, who got out of the inning without allowing another run. But by that point, the damage was done. San Diego went down in order in the bottom of the ninth, losing 6-3.

The baseball world was left wondering, what in the world is wrong with Hader?

So what did the Brewers know about Josh Hader?

Seems like they got out at the right time

All options who should be the Padres’ closer over Hader for the time being.

What did the Brewers know and when did they know it? #Hader

Hader has almost got to be tipping his pitches or something

Tipping his pitches would make some sense except that Hader hasn’t actually been hit especially hard since coming to San Diego. Call’s home run was not only the first home run he’s surrendered since being traded to the Padres but the first extra-base hit. His control, though, has been awful. In only 3.1 innings pitched, Hader has five walks and hit two hitters.

Overall, his numbers with the Padres are ugly. He has a 13.50 ERA and 2.700 WHIP in San Diego. And as bad as those numbers are, his performance has actually been worse. Neither of the two runs that scored against Hader on Thursday counted against his ERA, since they were on when he came into the game. On Friday, only two of the three runs he surrendered were earned, with the third scoring because of an error. Of course, the error was Hader’s.

Also, for most of the season, the Padres have had a Wild Card spot all but assured. Now, that is anything but certain. San Diego’s struggles aren’t exclusively Hader’s fault. but he’s clearly not helping matters.