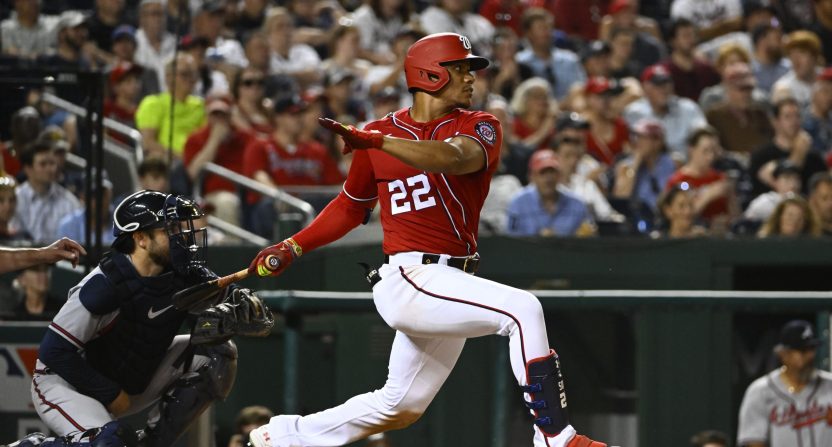 Might superstar Juan Soto soon be on the move? According to a report, it’s distinctly possible.

Ken Rosenthal of The Athletic reported on Saturday that Soto rejected a $440 million contract offer from the Washington Nationals, who will now “entertain trading him.”

Jon Heyman of the New York Post shed further light on the offer and Soto’s decision to turn it down.

Juan Soto declined $440M, 15-year offer from Nats and will be available now. A few reasons he declined: 1. Heavy backloading of deal is tantamount to big deferral 2. $29M AAV is seen as old figure in light of Scherzer, other deals 3. Team is likely to be sold so owner unknown.

Naturally, fans of several different MLB teams were hopeful that Soto would end up being traded to their favorite clubs.

NOWS THE TIME TO START THROWIN THE PROSPECTS YOU HOLD ONTO FOR DEAR LIFE CASHMAN https://t.co/i7IbnO6Ppa

I’m going to Little Caesar’s real quick to do my part @tigers @IlitchCompanies don’t let us down. https://t.co/tc3AsGV1Bj

Should the #SFGiants jump head first into the Juan Soto sweepstakes and which prospects would be on the table?@JDJohnDickinson and @KyleAMadson are reacting to this now!

There were other reactions, as well, from speculation on what kind of haul Soto might get to different commentary on Washington’s offer.

This trade package is going to be wild

Think a talented big leaguer, multiple high end prospects AND taking back one of the Nats bad contracts would all be on the table https://t.co/5nFm0QAMUU

I actually respect Soto turning down this huge money, as opposed to some athletes (** cough ** Watson… **cough ** Durant) who lock in the big bucks and then immediately demand a trade with 4+ years left on their deals https://t.co/RXgPLLZCKH

AAV was only $29.33. Soto will easily command mid $30s. Especially 8 years from now, him making $29M would be a major underpay. Makes sense for him to decline this offer. Esp with 2.5 years left on his current contract. https://t.co/kHsUCgef6h

Let’s start at half a billi or let’s not start all… https://t.co/lCZigxzSN4

It’s also important to remember that Soto wouldn’t be a rental player — at least not if he’s traded this year. He has two years of arbitration remaining before hitting free agency.

As such, while the Nationals may be fielding offers, there’s not a huge hurry to make this trade happen. If Soto isn’t traded before the August 2 deadline in 2022, Washington would still have two years to either deal Soto or reach an extension with him.

Obviously big news here, but there’s a big difference between “entertain trading him” and “trade him.” Sense I’ve always gotten is that Rizzo would have to be overwhelmed with a can’t-say-no offer to do it at this year’s trade deadline. https://t.co/bvBFVfQGGm

However, because of that, dealing Soto would bring in a massive haul. There is no doubt that teams around baseball will be lining up with huge trade offers. Soto is a career .292/.427/.540 hitter, has 19 home runs this year and is still only 24.

If Soto is going to be traded this year, the best bet would be that he’ll go to a contending team. But because of his age and contract status, that wouldn’t be a guarantee. If a team feels it can compete by 2024, it would make sense to at least explore the possibility of trading for Soto. If that team is contending this year, great. If not, the team would have two years to make something happen.

This will be one of the more interesting stories to follow going forward. Expect many twists and turns along the way.