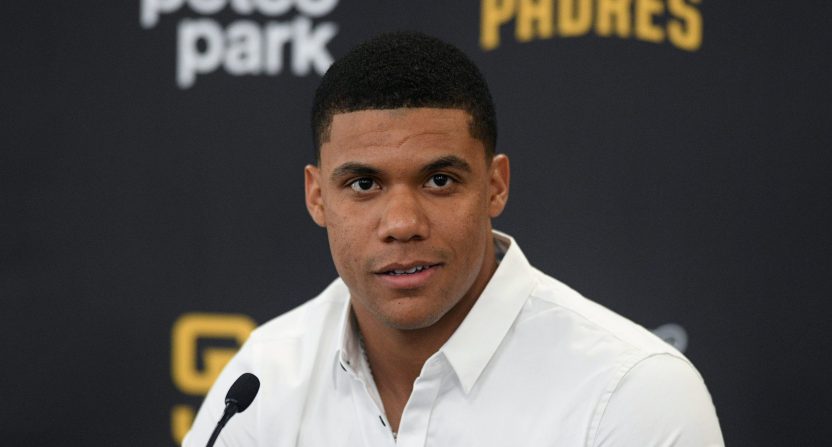 Superstar slugger Juan Soto was introduced as the newest star on the San Diego Padres, who acquired him from the Washington Nationals at the MLB Trade Deadline. First baseman Josh Bell also came to San Diego with Bell.

During his introductory presser on Wednesday, Soto had a message to all the opposing pitchers who will face a lineup that is already being lauded as potentially one of the best in the entire league once the team becomes fully healthy.

“I wish good luck to the other pitchers,” Soto said while cracking a smile.

"I wish good luck to the other pitchers" 😂@JuanSoto25_ | #TimeToShine pic.twitter.com/HYGmhrsD1h

The Padres, whenever they become fully healthy will have a lineup that will feature Manny Machado, who was in the MVP conversation earlier in the year, Fernando Tatis Jr. who knocked 42 homers last year, and Soto, who at 23 is already one of the best hitters in the majors.

Add in Bell, who stands at a towering 6’4 and hit .301 last season and Brandon Drury who has 20 homers this season and it may not be a stretch to compare this lineup to the New Yorl Yankees legendary “Murderer’s Row” which featured icons of the game like Babe Ruth, Lou Gehrig, Earle Combs, and Tony Lazzeri.

While it may be an overstep to compare the Padres’ new lineup to that of Murder’s row, even a pitcher as great as Clayton Kershaw may find some trouble against these guys as they maintain their position in the NL Wild Card race.