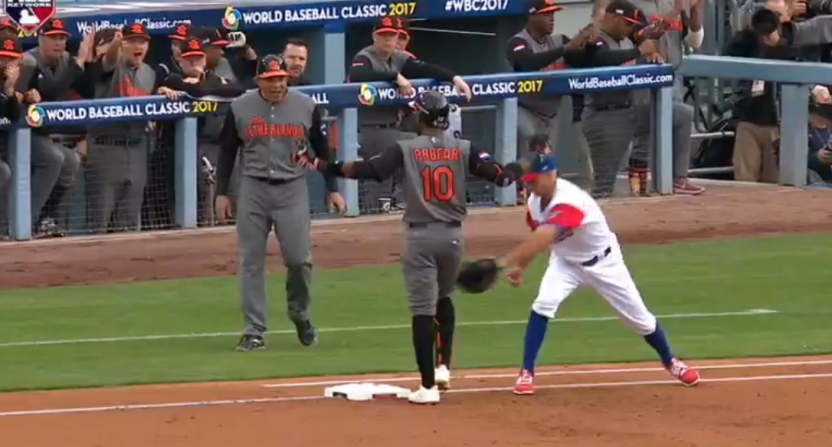 Celebrations have become a hotly-debated part of baseball, but it’s rare to see them lead to an out. That’s exactly what happened in the World Baseball Classic semifinal between Puerto Rico and the Netherlands, though, and it helped Puerto Rico advance to the final.

In the top of the first, with one out and a man on second, Dutch center fielder Jurickson Profar hit a single into right. Profar rounded first but didn’t go far, and the throw came home to Puerto Rican catcher Yadier Molina to prevent the run from scoring. Profar started celebrating and trying to pump up the crowd while walking back to first, and Molina calmly threw to first baseman T.J. Rivera to pick him off.

It’s amazing to see an out like this, especially in such a crucial game. The winner of this one goes on to face the winner of Tuesday’s U.S.-Japan tilt in the tournament final Wednesday, and it’s remarkable that a mistake like this played a role in the win. Puerto Rico would go on to win 4-3 in 11 innings.

In Profar’s defense, most of the time it probably would have been safe to walk back there. With a runner on third and only one out, most catchers aren’t going to fire the ball down there, and even with how fast Molina threw it, Profar was almost back at the bag in time. This was silly by Profar to not be more aware that a play could still be made, but it’s a play that most wouldn’t even attempt. Molina pulled it off and did so perfectly, though.

This was just one of Molina’s many brilliant defensive plays in this one, which won’t be a surprise to those who have watched him in MLB. Earlier in this inning, while Profar was at bat, he picked off Andrelton Simmons at second. It’s a good thing he got both Simmons and Profar on the bases, too, as the next batter (Wladimir Balentien) hit a massive two-run shot. Molina would come up with a crucial play in the fifth, too, making a great tag on Jonathan Schoop at the plate to end the inning.

Without Molina’s defense, Puerto Rico would have fallen quite a ways behind. That ill-advised celebration by Profar played a role, too, though, and it did help lead to Puerto Rico moving on to the final.