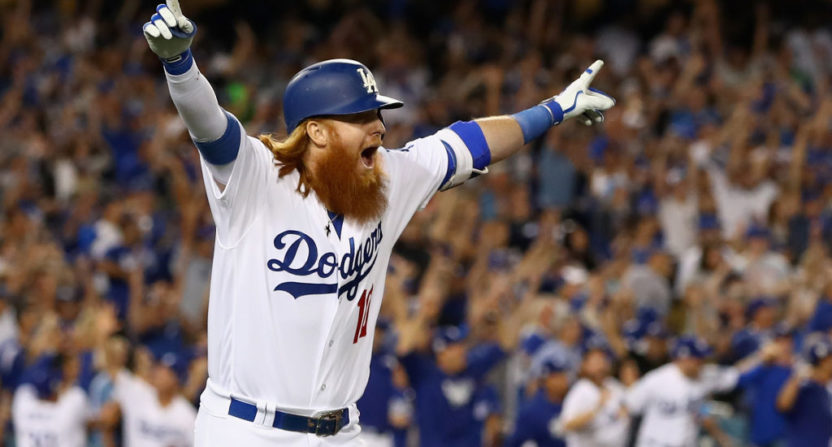 In the fall of 2013, Justin Turner’s career looked doomed. As he celebrated his 29th birthday, the infielder was a career .260/.323/.361 hitter without the glove or the legs to make him a productive Major Leaguer. In just over three seasons with the New York Mets, he had proven his versatility but failed to establish himself as a playable regular. In 2013, he mostly came off the bench, losing playing time to the likes of Omar Quintanilla and Ike Davis.

Then came an announcement that will live in Mets infamy.

Turner had not reached free agency. He was not expensive. The Mets could have negotiated a modest one-year deal to keep him from arbitration and hold onto a versatile player who had flashed some doubles-power, if nothing else. Instead, they cut bait.

Four years later, Turner is an All-Star, an MVP candidate, a team leader and, as of Sunday night, a playoff hero. In Game 2 of the NLCS against the Cubs, the man who was cut by the Mets at age 29 became the second player in Los Angeles Dodgers history to hit a walk-off home run in a playoff game, joining Kirk Gibson.

We don’t believe what we just saw! #NLCS pic.twitter.com/sJkKJhk3WU

Turner’s heroic homer Sunday night gives us an occasion to look back on what has so far been one of the most improbable careers in recent baseball history.

After being non-tendered by the Mets, Turner signed a minor-league contract with the Dodgers, impressed at Spring Training and was added to the team’s Opening Day roster. Using an upper-cut swing he had adopted late in his Mets tenure, he enjoyed by far the best season of his career, batting .340/.404/.493 in 322 plate appearances and earning his way into steady playing time. His campaign was widely written off as a fluke, until he went and hit .294/.370/.491 the next year. By 2016, he was the Dodgers’ regular third baseman and a key cog in their NL West-winning lineup. With a full year’s worth of playing time, he finished ninth in NL MVP voting.

This year, Turner took another step. Despite missing three weeks in May and June with a strained hamstring, the third baseman was voted to his first All-Star game and entered the break with an almost unbelievable .377 batting average. He cooled off, naturally, in the second half but ended the season hitting .322/.415/.530, for a 151 wRC+ that ranked fourth in the National League. The guy who was once non-tendered by the Mets had become a genuine MVP candidate and arguably the best player on the best team in baseball.

Turner’s change in approach has been well documented. His fly ball rate has climbed from 28.4 percent during his first full season in 2011 to 47.8 percent this year, and his power numbers have spiked in accordance. After hitting only two home runs his final season in New York, he belted 27 in 2017. He is now more selective at the plate, swinging a bit less and walking a lot more. With his revamped swing, he hits the ball harder than he used to, resulting in not only more home runs but also more singles and doubles. He is practically unrecognizable as a hitter from the guy who sputtered below league average rate stats in New York.

In case you need a visual representation of Turner’s incredible rise, here is his year-by-year WAR over the course of his career, via FanGraphs. 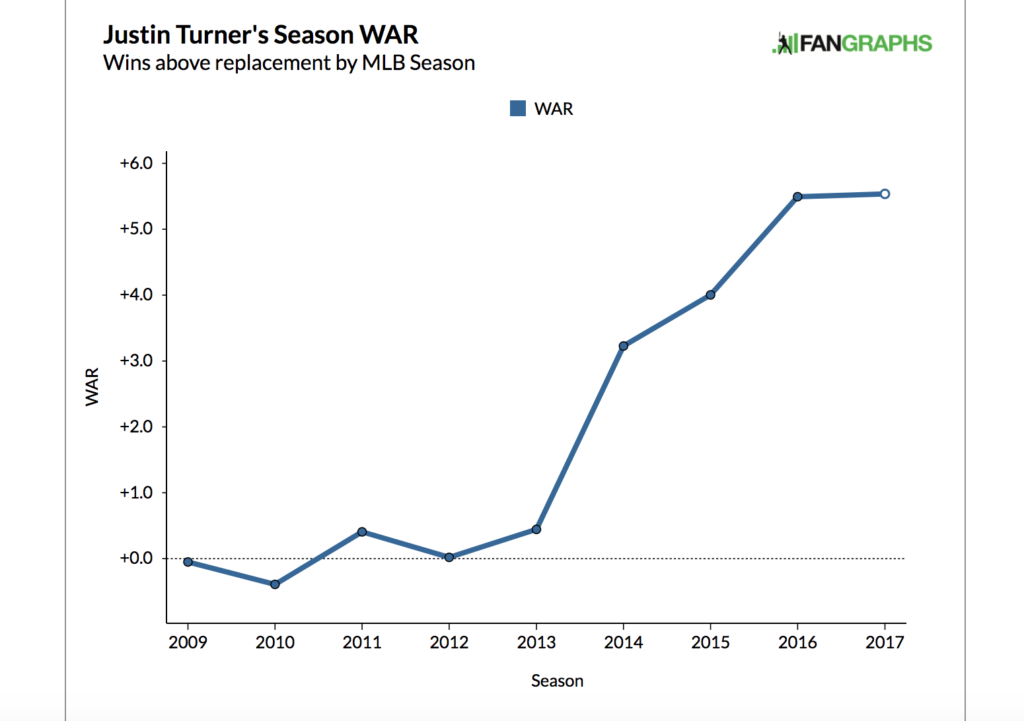 Turner was 29 years old when he jumped from being a nobody to a star. At that age, research shows, most players are winding down their primes, not launching them. Even other late bloomers from Ted Kluszewski to Jose Bautista to Josh Donaldson got going earlier than Turner did. The Dodgers’ third baseman is enjoying a career path that’s exceedingly rare even in the wacky and unpredictable world of baseball.

Sunday felt like the climax of Turner’s ascension. It was all there. The uppercut swing yielding a home run. The unshaved red beard (which he will cut if the Dodgers win the World Series) flapping as he rounded the bases. The delirious mob of teammates who consider him their leader waiting at home plate. As he nears his 33rd birthday, Justin Turner may never have another season like the one he just enjoyed. But one of the most improbable careers of the 21st century just gained a signature moment.