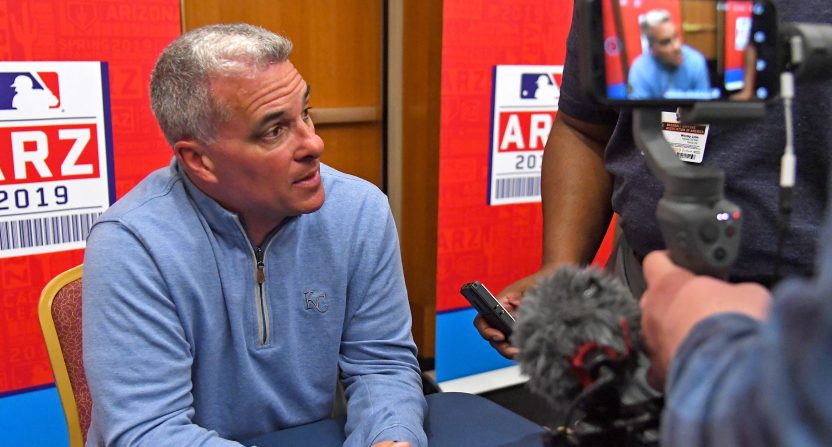 After 17 years with the Kansas City Royals, the organization has fired president of baseball operations Dayton Moore.

In a post on their website, it noted that the Royals are in the middle of a rebuild and were hoping for improvement this season. Instead, the Royals are currently 30 games below .500 and are only doing better than five teams in Major League Baseball. J.J. Picollo will be taking charge, becoming executive vice president and general manager overseeing baseball operations.

Moore had the achievement of building a team that won the ALCS twice and won the 2015 World Series as GM but that only goes so far. Apart from that, the Royals have finished below .500 in 13 of the 17 seasons Moore was in the front office.

Most people seemed to either understand why the Royals had to fire Moore or celebrating what happened.

I never thought it would actually happen, but I’m glad it did. Way too many stagnant years surrounding 2014-15, though I give Dayton a ton of credit for those years. Changing the trajectory and ceiling of the franchise has to start somewhere. https://t.co/6rK5ytx5g6

And now we wait for Eldred and Matheny to be shown the door. https://t.co/9XAclrir9l

In Moore's tenure, take out the COVID year, and the Royals have averaged 72 wins and 89 losses INCLUDING their two postseason appearances.
How many losing seasons does a World Series ring buy? https://t.co/4ZIy8E9ZO5

Moore deserves every accolade he received for the 2014-15 run, and I thank him for it. But after the last few years on the field, and the organization's complete inability to develop young pitching, it was time. https://t.co/nbOUaDm4h0

Even the royals have more accountability than the Pirates https://t.co/j0G5NXCXh8