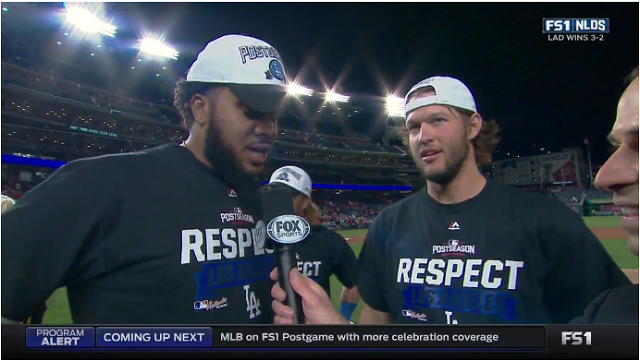 Thursday night’s Dodgers-Nats NLDS game was incredible for many reasons, but most notably due to what happened with the Los Angeles bullpen in the final innings to secure a trip to the NLCS.

Dodgers closer Kenley Jansen entered the game in the seventh inning, and was still out there in the ninth inning before understandably running out of gas. Two runners reached and Jansen was at a career-high 51 pitches, so Dodgers manager Dave Roberts decided to go back to the bullpen to bring in… Clayton Kershaw?!

When it’s an elimination game, managers have been known to go to their top starting pitchers out of the bullpen, but this was a really rare situation as Kershaw had just thrown 110 pitches two days before this in Game 4!

Well, Kershaw got it done, as he recorded a save in the Dodgers’ 4-3 victory to win the NLDS:

And after the game, he had a funny moment with Jansen while talking to FS1’s Jon Morosi:

All of this is so perfect when you consider that the last time Kershaw recorded a save, JANSEN WAS HIS CATCHER. Wait, what?

In August of 2006, Kershaw was an 18-year-old pitcher in rookie ball for the Gulf Coast League Dodgers, and Jansen was behind the plate, as Kershaw recorded his only other professional save. Making things even crazier, the game came against the Nationals’ Gulf Coast League squad:

2006 box score of Kershaw’s only other career save – w/ Kenley Jansen as his catcher! Also vs. the Nats. Note the attendance, bottom left. pic.twitter.com/cG2MINYEOm

Jansen played catcher in the Dodgers’ system from 2005 until 2009 before the Dodgers decided to turn him into a pitcher, and that was certainly the smart call as the 29-year-old has become one of the best closers in the game. However, Jansen may now have some competition for the best closer on the team with Kershaw in the fold. I say that jokingly of course, but it’s certainly possible we’ll see Kershaw used out of the bullpen again this postseason if the Dodgers are facing elimination.