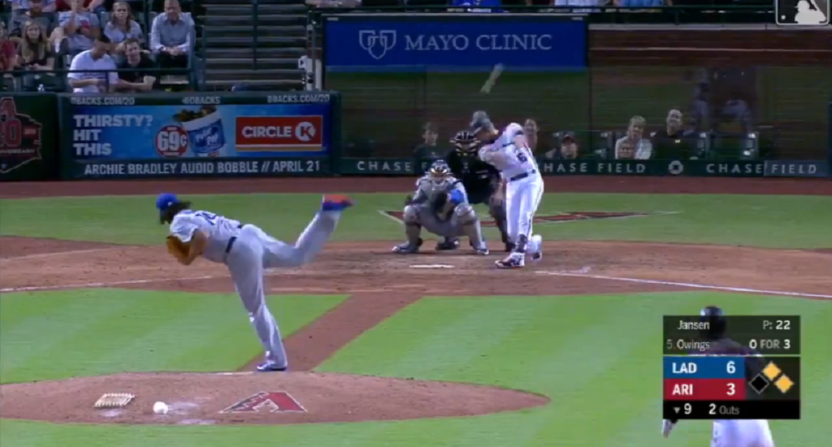 The first batter Dodgers star closer Kenley Jansen faced in 2018 was the Giants’ Joe Panik on Friday night at Dodger Stadium. On the second pitch, Panik crushed a Jansen 90-mph middle-of-the-plate cutter for what would serve as the game-winning homer (for the second straight night):

Jansen’s cutter is usually filthy, with plenty of late life and an average of 92-94 mph every season since he entered the league in 2010. That pitch had neither of those things on Friday night; he sat in the 89-91 mph range as you’d gather from that pitch to Panik.

After Fridays’s game, Jansen was asked about the velocity drop and repeatedly responded, “Who cares?” to the media in Los Angeles.

A pissed off Kenley Jansen repeatedly said “who cares?!” When asked about his velocity dipping 5MPH on his cutter tonight. #Dodgers pic.twitter.com/4uFHUNpqwO

Fast-forward to his second appearance of the season, which just happened late on Monday night in Arizona. Jansen entered the game trying to hold a 6-3 Dodgers lead, and got the first two batters out, before walking Paul Goldschmidt and A.J. Pollock. Jansen usually has ridiculous command to go with his filthy stuff; the right-hander walked just 2.7% of hitters in 2018 and 0.92 hitters per nine innings. And here he was with a three-lead walking batters with the bases open in the ninth inning.

Kenley Jansen has walked 2 batters in a game for the first time since Oct. 1, 2016

So then the tying run was at the dish in Chris Owings. On the first pitch, Jansen grooved another center-cut 91-mph cutter and Owings smoked it over the left field wall for a game-tying three-run dinger.

The Dodgers were looking to close this one out …@cowings5 had other ideas. pic.twitter.com/ZEofWo0njH

Kenley Jansen is 88-90 mph in his first at-bat against David Peralta.

Now, we’re talking two innings of data here, and most stuff you see fans concerned about even through a full month of the season is more likely small sample size noise than it is full-on panic time. Additionally, sometimes pitchers just take a bit to get going and see a velocity jump as the season goes on.

However, this *is* a bit concerning, when we’re talking not just a sizable velocity drop but some shoddy command to boot. This is anything but the Kenley Jansen we’re used to seeing, and keep in mind he threw an additional 16 2/3 innings — a lot for a reliever — during the Dodgers’ run to Game 7 of the World Series last fall. We saw Aroldis Chapman have some struggles with the Yankees early on last season after his extreme usage in the 2016′ Cubs championship run.

And it could all be related to a hamstring issues that Jansen dealt with in Spring Training, as KLAC’s David Vassegh noted:

Kenley Jansen missed some time in spring training with hamstring issues. His Cutter velocity in Freeway Series was in 88-90mph range as well. Wouldn't be surprised if his hamstring is part of all this. #Dodgers

We should also assume that the Dodgers’ front office is paying close attention to these trends more than anybody, and if they fear there’s a clear health issue, will likely have Jansen undergo further testing. It’s better to be safe than sorry when it comes to pitchers, and especially one as crucial as Jansen is to his team’s title chances. If it’s related to the hamstring issue or is a dead arm period that will frequently happen for pitchers, maybe he just needs some rest. And as I suggested earlier, there’s the possibility it’s just a matter of Jansen building up arm strength and the velocity naturally comes as the season goes on, but he’s never started the season with velocity anywhere near this low.

Whatever the case, something isn’t right with Jansen, and the Dodgers need to acknowledge this, even if he won’t. The velocity drop and command issues are very much worth caring about when it comes to arguably baseball’s best closer (again, usually).