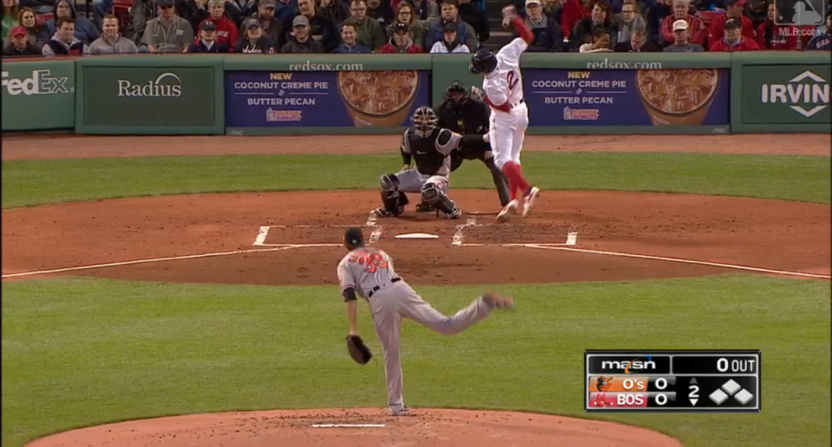 The Orioles-Red Sox feud of hit batters continued Wednesday, but in the most innocent way possible. At least innocent to everyone except home plate umpire Sam Holbrook. When Orioles pitcher Kevin Gausman’s 76 mph curveball to Red Sox shortstop Xander Bogaerts didn’t break and caught Bogaerts on the hip, Holbrook wasted no time ejecting Gausman from the game.

Right after Holbrook tossed Gausman, you can see Gausman summing up the thoughts of all sane people in the world: “It was a fucking curveball!”

On top of that being a pretty obviously innocent pitch, Gausman is known for struggling with control. He averages more than five walks per nine innings. How does an umpire come away thinking that’s enough to eject a pitcher in the second inning? I have no idea.

Meanwhile, Red Sox pitcher Chris Sale threw a 98 mph fastball behind Orioles third baseman Manny Machado in Tuesday’s game and got away with a simple warning.

While Barnes received a deserved ejection, Sale and Bundy avoided getting tossed. So it’s complete nonsense that this pitch that resulted in an ejection considering it was obviously the least intentional of them all. And no, there were no warnings in Wednesday’s game prior to Gausman getting tossed.

Pretty much everyone on Twitter, including Red Sox fans, couldn’t believe the ejection.

It seems a shame that a simple error by an umpire – with an understandably quick trigger – can't be reversed. Gausman should be pitching.

Agreed. This should be something where the crew can meet and get it fixed. https://t.co/TByRQxh0l6

Even @NESN announcers were in disbelief over the Gausman ejection. Umpire was "clueless." #RedSox #Orioles

When will common sense apply? Plate umpire guilty of over officiating when he threw out Gausman. Clearly-NO INTENT to hit Bogaerts. Wakeup!

Now for the rest of the game none of the pitchers can work inside out of fear of ejection. This is quite a mess.

Umpire obviously screwed up Gausman ejection in Boston. If MLB follows with a Gausman suspension that would really be something.

Gausman becomes the first player in history to intentionally hit a player with a breaking ball…that or Holbrook should see a suspension.

Assuredly even the commish will not be happy w the ump's decision to eject Gausman. Manfred's warning didn't absolve ump of common sense.