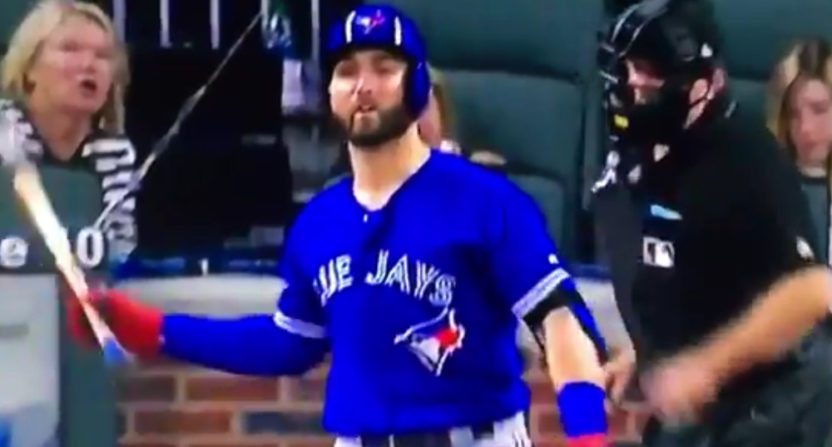 Wednesday night’s Toronto Blue Jays – Atlanta Braves game had plenty of notable events, including Atlanta first baseman Freddie Freeman getting hit in the wrist by a pitch (he’ll require a MRI) and the benches briefly clearing after a Jose Bautista home run, bat flip and slow trot. Blue Jays’ center fielder Kevin Pillar’s confrontation with Jason Motte following an alleged quick-pitch may wind up being the most newsworthy, though, as Pillar has been accused from numerous corners of making a homophobic slur against Motte. Here’s video of the incident:

The benches clear in Atlanta after Kevin Pillar takes exception to Jason Motte's quick pitch in the top of the 7th inning!!! pic.twitter.com/fcwxtUWuYL

So are we just going to pretend that @KPILLAR4 didn't initiate all this by yelling a gay slur? Better step up on this one, @MLB. pic.twitter.com/8bB3xijtCu

A whole lot of people thought that was Pillar yelling a slur:

I'm not on the field, but Pillar's mouth looks like it may have shouted a homophobic slur at Motte for quick pitching him

Did Pillar mutter to Motte what I think he did?

After the game, Pillar offered a limited apology, but one that doesn’t really seem to live up to the seriousness of what he’s accused of:

Kevin Pillar should be suspended by the Jays, or the league, and given training on homophobia. That’s it.

4) What upsets me as much as his use of the word 'fa**ot' is the apology, and how #Pillar quickly made it about him and moving on. #BlueJays

I'm not totally sure Kevin Pillar realizes we all know what he said. Screw the apology to Jason Motte…it's others that need to receive one

Kevin Pillar is probably my favourite Blue Jay right now. I'm not being vindictive. I want him to be accountable. I'll be sad if he's not.

@gregorMLB He needs to apologize to the fans, not just the pitcher. Be accountable and learn from this. He hurt people tonight. #BlueJays #Pillar

Seriously, Pillar needs to recognize who he let down, and apologize to the LGBTQ2S community. My Toronto doesn't tolerate "innocent" slurs.

It’s notable that the Blue Jays have recent history with homophobic slurs, as Yunel Escobar wound up in hot water for a slur on his eye black back in 2012, which led to him being traded soon after. Many noted that it seems unlikely the same level of punishment will come down against Pillar:

Kevin Pillar is trying to get out in front of something that got Yunel Escobar run out of town. And it will work.

im already seeing excuses for kevin pillar. key to having people give you the benefit of the doubt:
1) be white
2) make catches
3) gritty

@IamHarshDave Yunel Escobar got chased out of town over this slur on his eye-black. Fans/media ripped his "culture" too. Neither will happen with Pillar.

Oh, and while this would be problematic on any day, the timing here might have been particularly bad:

There's NEVER a good day to say what Kevin Pillar reportedly said as it's completely unacceptable and today of all days is a HORRIBLE look https://t.co/IoaOu83uln

It’s going to be interesting to see how this develops, and if there are any further apologies from Pillar, or actions against him from the team or the league.