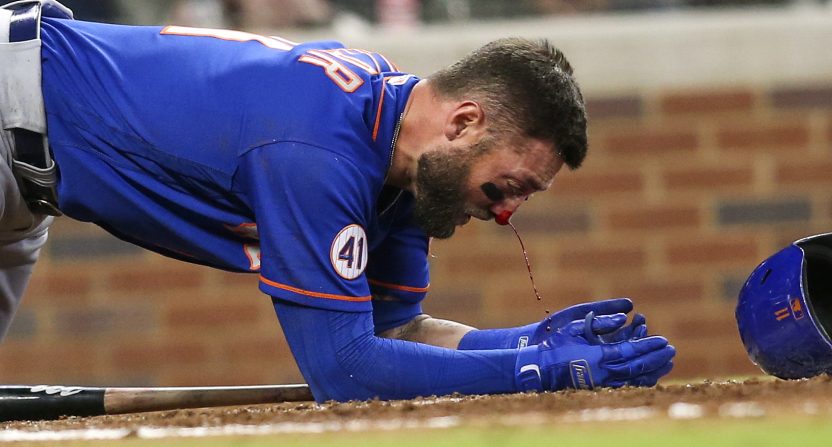 I played catch with my younger brother a few weeks ago. He played (and pitched) varsity baseball in high school, and currently plays in a men’s league. I played Babe Ruth league and was cut from the JV team as a freshman.

I realized a few things during that hour or so.

Two: the prospect of being hit in the face by a baseball feels a lot more real now than it did for all the years I played growing up. Even just playing catch with someone who can clearly throw, I noticed that I was stepping to the side to avoid catching anything right in front of my face.

Anyway, I said all that to say that a baseball in the face is something to avoid at just about any speed. When it’s a 94 MPH fastball, it’s just about the worst case scenario, as Kevin Pillar found out last night.

You know it’s bad when the pitcher is basically recoiling before the struck batter hits the ground. That was the case last night for Braves hurler Jacob Webb.

Kevin Pillar was just drilled in the face by a pitch and immediately left the game in Atlanta.

Hoping for the best 🙏 pic.twitter.com/T67yrlkWoU

Yeah, that’s awful. Seeing blood immediately gushing is a great reminder that baseball is one of the safer sports to play right up until it’s one of the most dangerous. The aftermath was actually surreal; it’s rare that umpires have to delay resumption of play in order to throw some diamond dry (or whatever it was) down in the batter’s box to clean up blood.

Scary scene at Truist Park after Mets player Kevin Pillar gets hit in the face with a pitch. pic.twitter.com/LriIV4ESB5

Even the Braves expressed their hope that Pillar was okay:

"That's about as sickening as a thing as you can see on a baseball field…this guy is nothing but a pro the way he carries himself, how he plays the game" pic.twitter.com/zyJK0CRbyj

Fortunately, Pillar himself took to Twitter a few hours after the game to let everyone know that he was, in fact, doing okay:

Thanks to everyone that has reached out! Scary moment but I’m doing fine! #RBI #gamewinner 👍🏽👍🏽

That’s obviously great news. Hopefully Pillar passes whatever tests are necessary and can get back on the field as soon as possible. Meanwhile I won’t be playing catch again anytime soon after watching that highlight.