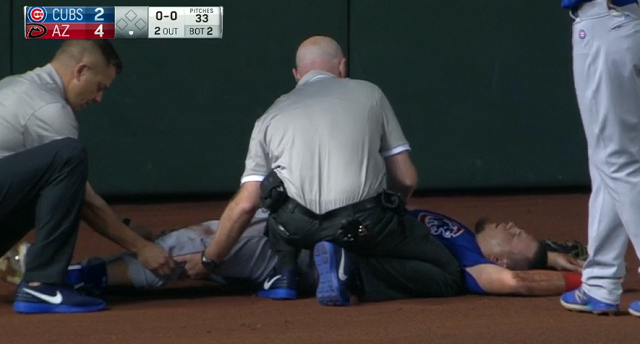 UPDATE: Kyle Schwarber is out for the season with full ACL and LCL tears, as well as a “severe” ankle sprain. Brutal. However, the Cubs have the depth, versatility, and overall talent to overcome this on paper, as I explained in this post on Thursday night.

Chicago Cubs slugger Kyle Schwarber suffered what appeared to be a serious injury in a collision with Dexter Fowler, during the third inning of the team’s game against the Arizona Diamondbacks on Thursday at Chase Field.

Jean Segura — who had already homered on the first pitch of the game — hit a John Lackey pitch deep into the left-center field gap, and Schwarber and Fowler collided trying to catch the ball. It turned into an inside-the-park homer for Segura, but the far bigger story for the baseball world was Schwarber falling to the ground in pain, and eventually being carted off with a leg injury.

Ambulance cart driving onto the warning track for Kyle Schwarber, who is standing and being supported by both trainers.

A cart is coming out for Kyle Schwarber. Trainers appeared to be looking at his left ankle, which he isn’t putting weight on. — SI MLB (@si_mlb) April 8, 2016

It certainly looked really bad — and having to leave on a cart would seem to confirm it was bad — but so far it looks like Schwarber is just being evaluated for a sprained ankle. He’s already had an x-ray, and there was no fracture.

The MRI could obviously tell a lot more here, but it’s certainly good news that he apparently didn’t suffer a knee injury, and if it’s just an ankle sprain? That would be fantastic news for Schwarber and the Cubs. Even if it’s a high-ankle sprain that keeps him out over a month, the Cubs would most definitely live with that.

(UPDATE on Thursday night: The Cubs will also give Schwarber’s left knee an MRI look , but they think it’s just a bruise).

Schwarber quickly became a fan-favorite as a rookie in 2015, hitting 16 homers and putting up an .842 OPS in 273 plate appearances for the Cubs. And then in the playoffs, he took things to another level, setting a Cubs franchise record with five postseason homers (with a couple of those being very memorable mammoth blasts).

The Cubs are the consensus World Series favorites for the 2016 season, with Fangraphs’ projections currently having Chicago at about 97 (again, projected) wins. If this ended up being a multiple-month injury for Schwarber, it would certainly hurt the Cubs, but they have tremendous depth where they — on paper — could definitely overcome it.

So, the Cubs’ depth and versatility are huge in this situation, but there’s no doubting they will miss Schwarber’s bat for however long he’s out. Hopefully that won’t be too long.