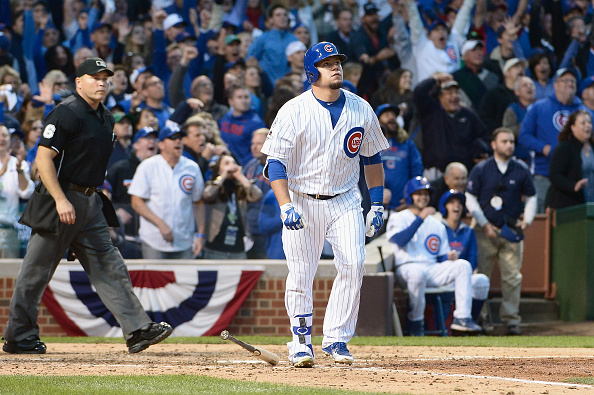 It (incredibly) appears that the Chicago Cubs will have their all-time postseason home run leader available for the World Series. FanRag Sports’ Jon Heyman and Fox Sports’ Jon Morosi report that Kyle Schwarber is expected to be on the Cubs’ 25-man World Series roster, and is even expected to be the designated hitter for Game 1 of the series. Morosi reports that Schwarber is on a private jet en route to Cleveland:

Kyle Schwarber en route to Cleveland now on a private jet. He’s expected to DH for the #Cubs in Game 1. @MLB @MLBNetwork

barring something unforeseen, kyle schwarber is expected to be activated for the WS to be cubs DH. https://t.co/4iuj4gbQkp

Schwarber tore his ACL and LCL in early April and shocked the baseball world by going to play in the Arizona Fall League over the last few days, with the hope of being able to play in the World Series if all went well. The slugger has looked good in batting practice and there has been progress seen in his game at-bats as FanGraphs’ Eric Longenhagen wrote after Schwarber’s Arizona Fall League game on Monday:

This afternoon in Mesa I was able to get a second look at Schwarber and see if any progress was evident. I believe there was and, while I can’t deny the way Schwarber is running the bases is slightly disconcerting, I think there’s enough juice in the bat right now to justify rostering him over either Chris Coghlan or Jorge Soler. Schwarber’s hitter’s timing was a bit better today than it was on Saturday and the quality of his contact was stronger even though he was beating the baseball into the ground. He went 1-for-3 with a double which came on a hard hit ball that got through Surprise 1B Ryan O’Hearn and careened into right field.

The Cubs were paying attention to Schwarber’s at-bats on a monitor in Cleveland on Monday as the team worked out at Progressive Field, and Cubs president of baseball operations Theo Epstein said that Schwarber hit a ball with 110 mph exit velocity:

Schwarber will not be asked to play defense; he’s just going to be up there to swing the bat and try to launch his glorious dingers with four of a potential seven games coming in an AL park. It remains to be seen how good he can be vs the likes of Corey Kluber and Andrew Miller with just a handful of Arizona Fall League at-bats under his belt, but it will sure as heck be interesting. And it’s quite an unprecedented situation.

In other notable World Series injury news, Indians All-Star pitcher Danny Salazar hasn’t pitched in a game since suffering a strained flexor in his right arm in early September, but he will be on the 25-man roster and is reportedly good to throw 60-70 pitches.

Danny Salazar will be on the #Indians roster and can be used as starter/reliever, Francona says, perhaps pairing him with Merritt in Game 4 — Bob Nightengale (@BNightengale) October 24, 2016

Cleveland pitcher Trevor Bauer threw a live pitching session on Monday with his nasty finger apparently doing better, and he hopes to start Game 2 of the series:

Trevor Bauer thinks his wrapped up pinky finger will be just fine and he’s planning to start Game 2 for Cleveland.

And Indians star second baseman Jason Kipnis has a sprained ankle (suffered while celebrating the Indians’ pennant-clinching win), but thinks he’ll be good to go for Game 1:

Jason Kipnis on whether he’ll play tomorrow: “Should be good… doctors have stuff that can take pain away. I’ll be all right.” — Zack Meisel (@ZackMeisel) October 24, 2016

So, while there are a few injuries to monitor heading into the World Series, it appears the news is pretty good for both teams on that front, and would certainly make for a more entertaining series if all of these players are a part of it.