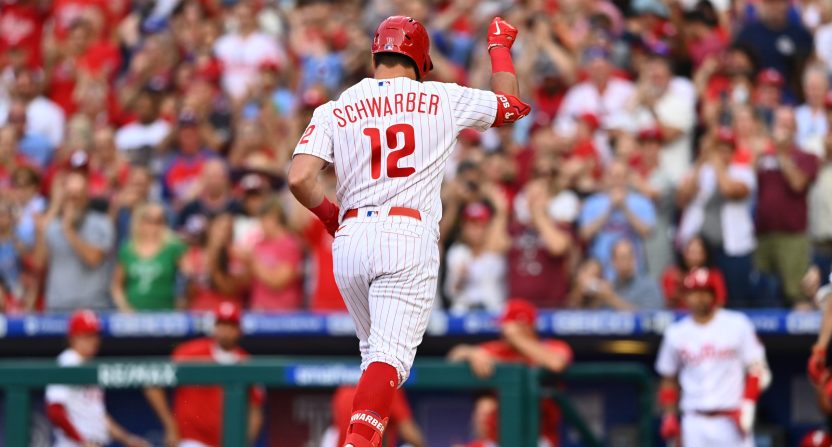 Entering the Phillies’ game against the Atlanta Braves, Schwarber had a career home run ratio of 9.93 at-bats/home run, as noted by Stark. That’s the No. 1 ratio in modern history, with some guy known as Babe Ruth second at 10.63 AB/HR.

Fun June numbers dug up by the #Phillies on Kyle Schwarber.

And sure enough, Schwarber soon hit yet another dinger with this game-tying blast to center field in the seventh inning:

Make that one every 9.76 AB for Schwarber after that 7th-inning laser beam.

This June, Schwarber has hit 11 homers and driven in 24 runs, with the best slugging percentage in the majors.

He is tied with Pete Alonso for most homers in the NL this year
pic.twitter.com/GmOmht73EJ

And here’s another incredible factoid, from ESPN Stats & Info. Schwarber has hit 27 homers in June over the last two seasons, eight more June homers than any other player. He has 27 homers in 52 June games, and 27 homers in the other 134 games.

Kyle Schwarber has 27 HR in June since the start of last season, 8 more than any other player.

Schwarber has 22 homers on the season, which has him tied for third in the majors (and six behind Aaron Judge).

LIVE look at the HR leaderboard:

He also has a 31-game on-base streak, which is the longest Phillies on-base streak since Chase Utley reached in 35 straight games in 2006.

Kyle Schwarber's 31-game on-base streak is the longest by a Phillies player since Chase Utley (35 games) in 2006.

Unfortunately for Schwarber, his home run wasn’t enough for the Phillies in a 5-3 loss to the Braves.

Update: Schwarber hit another home run on Thursday, the final day of June.

You knew Kyle Schwarber had to get in one last June homer. 😱 pic.twitter.com/6GHDEmcOdN

Through the 3rd inning today, Kyle Schwarber has hit 47 homers in 457 career June at-bats (one every 9.7 at-bats).

That's the best home run ratio in the month of June in MLB history, ahead of Babe Ruth.