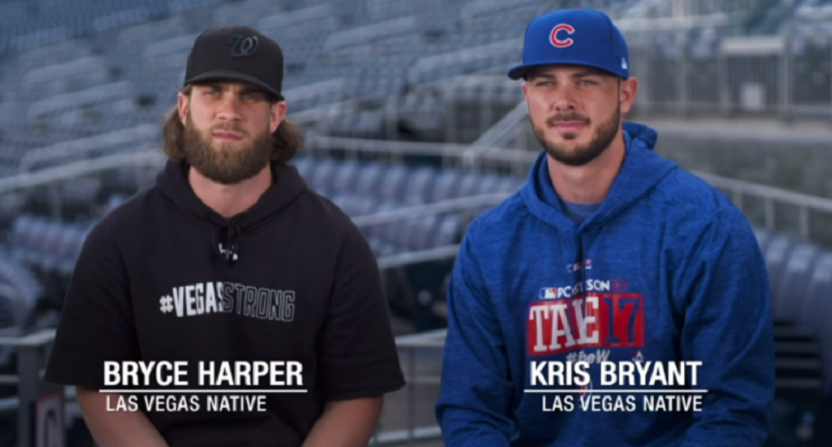 Before Game 1 of the NLDS between the Cubs and Nationals on Friday night at Nationals Park, a PSA featuring the Nationals’ Bryce Harper and the Cubs’ Kris Bryant was shown on the videoboard. The two superstars are from Las Vegas, and are teaming up to help the victims of Sunday’s mass shooting that left 58 dead and nearly 500 injured.

Las Vegas natives Bryce Harper and Kris Bryant appear, side by side, on the big board to ask for support for their hometown.

We’re asking for help, in supporting the victims and their families of this tragic and horrific act that impacted so many across our country.

To offer support or make a donation, please visit ClarkCountyNV.Gov.”

ESPN’s Jesse Rogers spoke more with Harper and Bryant about the PSA and being from Las Vegas. Harper talked about Vegas being very small and how if you grew up there, “you know everybody.”

“The biggest thing is, Vegas is very small,” Harper said after filming the PSA. “If you were born and raised there you know everybody. You know who this person is on this side of town or that side of town. Relatives, friends, whatever. So when something happens like this, it’s going to hit home.”

Bryant said that while you don’t want to see a tragedy like this happen in your hometown, ‘it’s been amazing to see the community and people come out and help.”

“You don’t want to see it happen to your hometown, but it’s been amazing to see the people in the community come out and help,” Bryant said. “I don’t know if I’ve ever seen a response like that. People wanting to help other people. It shows that even in a time like this there are good people out there.

Bryant added that with the platform they have with the NLDS, “the PSA was an easy thing to do.”

“In the NLDS, and the platform we have, the PSA was an easy thing to do,” Bryant said. “We wanted to help out in any way we can. People are going to be struggling for a long time — just as they are after the hurricanes. You see this country coming together. Whatever we can to get people to support, we’re ready to do.”

Baseball is in good hands with young stars making a difference off the field like this. Well done by Bryant and Harper,  who are certainly making their hometown proud.