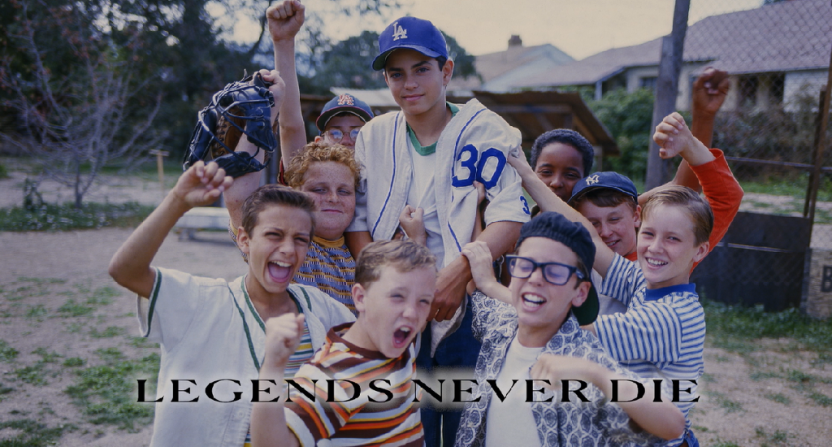 “The Sandlot is essentially me turning all of my villains, or bullies from my childhood, into heroes. Yeah, I had a bad childhood. Guess what? I’m going to change it. So I did. I changed it. I changed history. It’s not the way it was. Not for me. It’s the way it should’ve been. That’s The Sandlot.”– David Mickey Evans.

This year marks the 25th anniversary of the classic coming-of-age baseball film, The Sandlot. You’re probably already aware of the anniversary, with the film even getting a brief re-release in theaters. It’s been a tour — across MLB ballparks and TV shows — like you see from a blockbuster movie that just came out, and we’re talking 25 years later. But that’s how popular The Sandlot is. That’s the impact it’s had on not just the baseball world, but pop culture in general.

And that makes Legends Never Die: The Sandlot Story a documentary that many people can enjoy.

Legends Never Die — directed by David Terry Fine; put together by Fox Sports and MLB — takes a look back at the making of The Sandlot, with plenty of behind-the-scenes footage.

What we learn in Legends Never Die is that the cast — and production crew — had *a lot* of fun making The Sandlot.

Grant Gelt (Bertram Grover): “We weren’t setting out to make The Sandlot. We were a bunch of kids going to Salt Lake to play baseball and make a movie.”

Tom Guiry (Scotty Smalls): “It was probably the best summer of my life, was making that movie.”

Marty York (Alan “Yeah-Yeah” McClennan): “I mean it was like nine guys having the time of our life.”

Brandon Adams (Kenny DeNunez): “You could take the cameras away, and it’s still the best summer.”

Victor DiMattia (Timmy Timmons): “There was just constant prank-pulling, and your mama jokes.”

Patrick Renna (Hamilton “Ham” Porter): “For us the memory is just a beautiful, best summer of our lives. Not because we were filming, but because we were hanging. So, we kind of lived The Sandlot.”

The documentary focuses a lot on David Mickey Evans, director, co-writer, and narrator of The Sandlot. Making The Sandlot was deeply personal to Evans, as you can see in this clip: