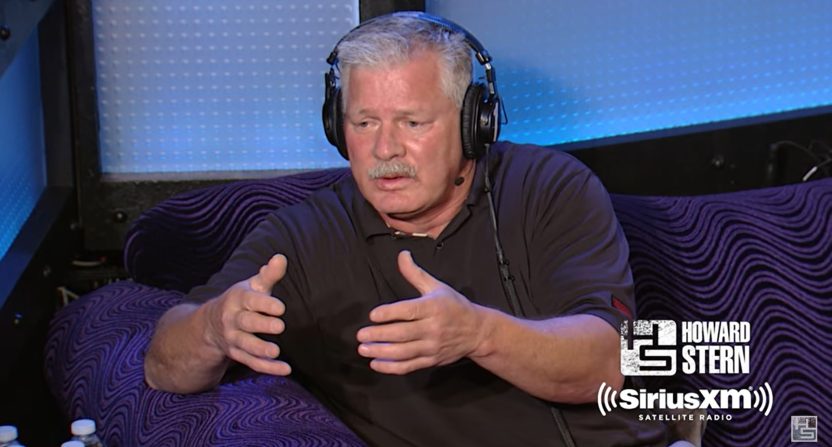 Never one to mince words when speaking to Howard Stern, or anyone for that matter, Lenny Dykstra revealed an interesting fact about his former teammate Keith Hernandez Tuesday morning.

While appearing on Stern’s SiriusXM Radio show, the King of All Media asked Dykstra for his thoughts on Hernandez having his uniform number retired by the New York Mets. Dykstra spoke fondly of Hernandez, but he also made the surprising reveal that the former first baseman used to make him smoke cigarettes during the national anthem.

“I think it’s great, Keith Hernandez was my mentor, he taught me how to play baseball,” Dykstra claimed to Stern. “He also made me smoke cigarettes in the runway when the national anthem would come. Cause he’d say ‘smoke a cigarette with me and I’d f***ing say, ‘I hate cigarettes,’ but I didn’t say it to him so I started smoking cigarettes with him.”

One of the most famous photos of Hernandez as a Met features him sitting in the dugout and enjoying a cigarette during a game, a surprising image today, despite it being a common occurrence decades ago. And apparently, Hernandez used to recruit Nails to join him for a smoke. Dykstra, however, was more commonly known for playing with a giant wad of chewing tobacco in his mouth.

Hernandez provided veteran leadership to Dykstra and the rest of the Mets 1986 World Series champion squad. He’s since further ingratiated himself with Mets fans as a broadcaster, partnering with his ’86 teammate Ron Darling and play-by-play voice Gary Cohen in the SNY booth.

Dykstra has spent three years railing against Darling for comments the former pitcher made in his book 108 Stitches: Loose Threads, Ripping Yarns, and the Darndest Characters From My Time in the Game. But Dykstra’s disdain for Darling clearly hasn’t rubbed off on the way he views Hernandez, his mentor and cigarette buddy.

“Keith Hernandez, he deserves it,” Dykstra added of Hernandez’s upcoming jersey retirement. “I’m happy for him.”