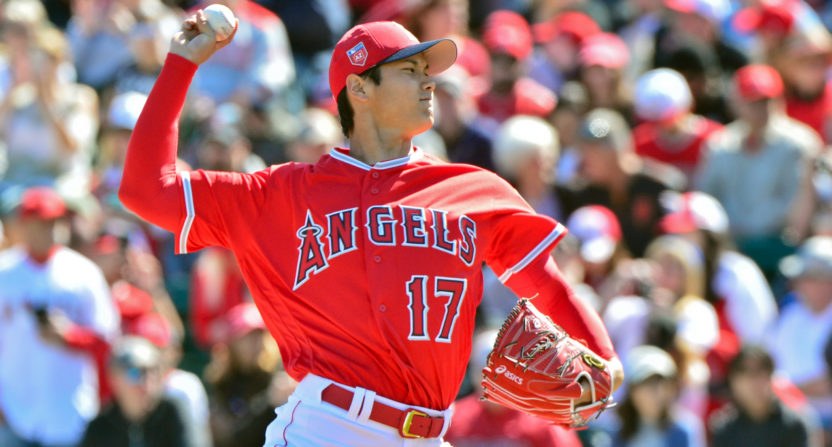 Shohei Ohtani faced Major-League batters Saturday for the first time since signing with the Los Angeles Angels, which meant for one afternoon the baseball world focused its attention on Cactus League action at Tempe Diablo Stadium.

Now, before we should go any further, we should acknowledge that a player’s first action of Spring Training is absolutely meaningless from an analytical perspective. The whole point of the preseason is for players to work their way into game shape, and it’s entirely unfair to judge them on how they perform in February.

OK, with that out of the way, let’s go crazy breaking down Ohtani’s four-out American debut, in which he faced a watered-down Brewers lineup.

Rough start for our man! Ohtani left a fastball up and over the plate and Jonathan Villar punished him with a leadoff ground-rule double.

Three pitches, three strikes, with the final blow coming on a breaking ball in the dirt.

Shohei Ohtani is bringing the ???. It’s #ShoTime with the @Angels (via @FoxSportsWest) pic.twitter.com/TFDLI2vX96

A four-pitch walk put another runner on base. By the end of the outing, Ohtani had thrown 17 strikes and 14 balls, which is not great.

Batter No. 4 — Manny Piña strikes out

After a throwing error by Angels catcher Martin Maldonado plated an unearned run, Ohtani induced a pop up with a runner on third base.

Batter No. 5 — Brett Phillips strikes out

Ohtani ended the first inning with his second and final K of the day, freezing Brett Phillips with a curveball.

Afterward, an amused Phillips told reporters that Ohtani turned to breaking balls after he put a good swing on a first-pitch fastball.

Ohtani left a fastball over the middle, and Keon Broxton made him pay with a no-doubt home run. The blast ended Ohtani’s pursuit of a 0.00 Spring Training ERA.

Keon Broxton’s HR off Shohei Ohtani via a 1-1 fastball down the pipe. pic.twitter.com/htuMEj7KzT

Batter No. 7 — Nick Franklin flies out to left field

Ohtani’s fastball reportedly sat mostly in the 93-94 mph range but touched as high as 97. He also flashed a 70-mph curveball. Here’s how FanGraphs’ Eric Longerhagen summed up the outing:

Ohtani struggled to find a consistent release point during his brief outing, which is of little concern given that he barely pitched last year and this was his first spring-training appearance. A source at the game had Ohtani’s fastball ranging 91-97 mph. He threw all of his secondary pitches, the best of which was a plus to plus-plus splitter in the 84-88 mph range. He also threw one knee-buckling, change-of-pace curveball at 70 mph and a few sliders in the 79-80 mph range.

Of course, six weeks from now Ohtani will be playing baseball games that actually count, and no one will remember how he performed in some Spring Training game. But for the moment, obsessing over a seven-batter appearance is all we’ve got.