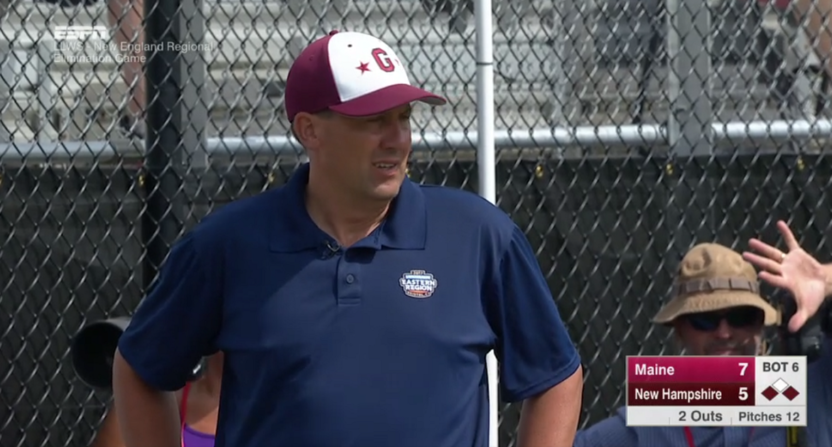 Here’s yet another example (this one from the Little League World Series) that whatever problems there are with youth sports stem from the adults involved, from coaches to parents to the television networks who broadcast them.

On Friday in regional action, the team from Goffstown, New Hampshire trailed Maine 7-5 with two outs in the bottom of the sixth inning. That meant that the game could end at any time. New Hampshire still had a player left who hadn’t yet played; as this is Little League, every player is by rule supposed to play. Because, again, these are kids. That’s one of the redeeming rules about the competition, actually.

In this case, though, rather than send the kid to the plate with the game on the line, the coach elected to violate the rule, which is apparently something you can do? It’s not really much of a mandatory rule then, is it?

Here’s the sequence in question:

Good for Karl Ravech for calling out the behavior, but it’s unfortunate that that didn’t seem like a unanimous decision from the broadcast team. Because karma is sometimes, New Hampshire ended up losing, 7-6. The coach would have been suspended at Williamsport had his team gone on to win, but think about what he did there.

According to the coach, the player turned down an earlier opportunity:

O’Connell said Bergeron declined an opportunity to bat first in the bottom of the fourth, causing the manager to wonder if “he wasn’t feeling good.”

“We gave him an opportunity in the fourth inning,” said O’Connell, who faced a two-game suspension had New Hampshire advanced. “He chose not to hit. So then waiting for the right time to get him in in the sixth, and to put him in a situation where (it was) do-or-die with the game, I didn’t feel it would be very fair.”

Yeah, sure. Whatever you say, coach. The opposing coach had the correct viewpoint:

Upon learning the decision had been a calculated gamble, Poole shook his head.

“Well then, you know what? They should be going home,” he said. “It’s unfortunate for that group of kids, but the coaches, I hope, learn from that. That’s not setting a standard. It’s too bad. It really is.”

Little League president Stephen Keener also weighed in, noting that while there’s a certain flexibility with the rule, in the event of an injury or illness, that wasn’t what happened in this situation: