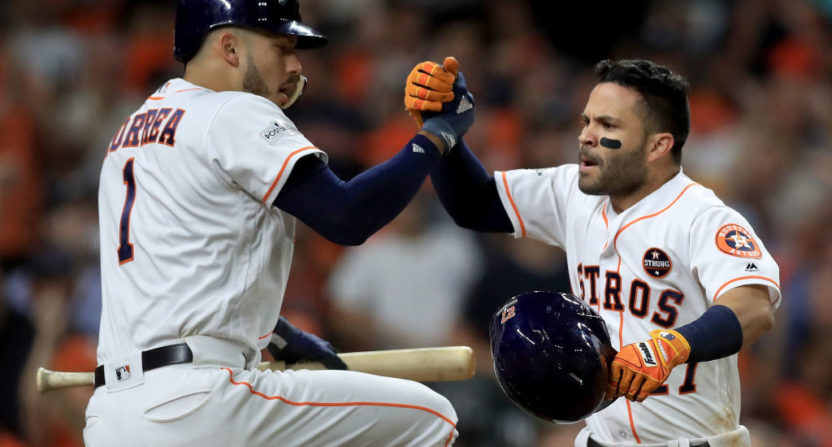 The Houston Astros’ sign stealing scandal has reached all corners of sports. And considering Rob Manfred manages to make things worse every time he opens his mouth, it has even compelled athletes from outside baseball like LeBron James to have strong feelings about what happened.

The scandal has also reached various Little League teams across the country. Most youth teams utilize pro team names and now that the Astros were found to have cheated to win the World Series, some parents and organizations don’t want to be associated with that name. Even if it’s by name only.

The head of the District 16/31 Little League, Bob Bertoni ruled that teams within the 23 leagues he oversees cannot use the name.

“I think about our Little League pledge; that’s the first thing that comes to my mind. Part of the pledge is, ‘I will play fair and strive to win,'” Bertoni said.

“Our kids emulate and idolize major league players,” he added. “I don’t think we as an organization should be idolizing teams that have decided not to play by the rules.”

This leads to a wider debate that’ll no doubt spiral out of control. Some people will see this and view it as a positive step in not condoning actions made by professional athletes that children may look up to. Others will see this as an overreaction and feel it’s misplaced anger when other pro players and teams have been in trouble on and off the field over the years.

The governing body, Little League International, revealed they will not be restricting any league from using the Astros name but they aren’t necessarily stopping leagues from banning the name either.

Even if a team wanted to be the Astros, it may be more difficult to do that this year. Bertoni revealed that a local supplier told him they were not going to be selling Astros gear for Little League teams, protesting what happened so supplies may be more limited depending on the location. Bertoni also predicts that more organizations will adopt the ban when Little League heads meet in Connecticut in two weeks and given this story doesn’t seem to be going away, he might be right.