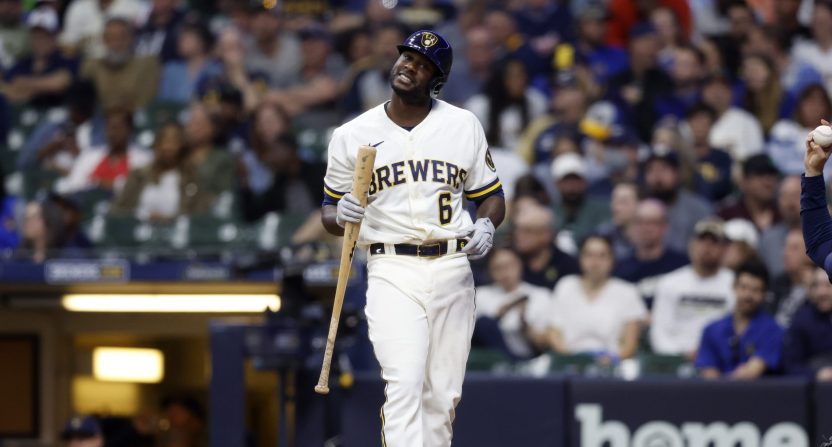 While it remains to be seen if his Major League Baseball career continues, it appears that Lorenzo Cain’s time with the Milwaukee Brewers is officially over.

The Brewers designated him for assignment on Sunday, ending his second stint with the club.

OF Lorenzo Cain designated for assignment.

The Brewers selected Cain in 2004 and he briefly played for them in 2010 before being shipped off to the Kansas City Royals in a trade for Zack Greinke. Cain played in two World Series for the Royals, winning one of them, and earning an All-Star spot in 2015. He was also named 2014 ALCS MVP.

In 2017, he signed a club-record $80 million free-agent contract to return to the Brewers. He was named an All-Star in 2018 and earned a Gold Glove in 2019. However, injuries took their toll, and Cain’s numbers have dropped off precipitously in the years since.

Cain reflected on his time not only with the Brewers but in the Major Leagues on Saturday. While he didn’t mention retirement, it sure sounded like someone who is ready for the baseball career to come to an end.

Lorenzo Cain showed up to his first baseball practice in 10th grade wearing a collared shirt, jean shorts and basketball shoes. Then he played 10 years in the Majors, made two All-Star Games, won a Gold Glove and a World Series.

Today, he was DFA’d by the Brewers. pic.twitter.com/HOe5EJuXEc

“A kid from Madison County, [Fla.], that just showed up and didn’t have a glove or a bat, cleats, any of that,” said Cain, who didn’t play baseball until he was in the 10th grade. “I had to borrow everything from the very beginning. To say that I’ve played 10-plus years in the Show, I couldn’t ask for anything more.

“It’s been a great ride for me, a fun ride. I put a lot of work in. I put this body through a lot through the years. At the same time, I think the body is ready to rest a little bit, for sure.”

A beloved player throughout his career, the news that Cain’s time with the Brewers was over garnered a lot of reactions from around the MLB world.

Best player on the best Royals team of all-time. The score from first on Hosmer's single in Game 6 is one of the most exhilarating plays you will ever see. And every day in the big leagues he's walked around like his feet are crumbling in real time. Legend. https://t.co/Kuamr2vFhl

Aw, man. I always enjoys watching Lorenzo Cain, and was lucky enough to cover the 2015 ALCS clincher where he scored the winning run in a mad dash from first base on a single. This iconic photo was my Lock Screen for nearly year https://t.co/JWuPNA4As4 pic.twitter.com/R3kbA1opDm

Lorenzo Cain is one of my favorite all-time KC Royals. Those 2014 & 2015 teams brought so much joy to my life & I'll forever be grateful that I got to experience that run as a true blue fan. I hope this isn't the end, but if it is, thanks, Lo Cain. You done good. https://t.co/uShRjXbTnI

A Kansas City hero who played a lot of games and covered so much ground on balky knees and still rarely missed a beat (or a catch). Would be a major asset to the Royals organization as a coach, if this is the end of the road for him as a player. https://t.co/zz1CWsm1WH